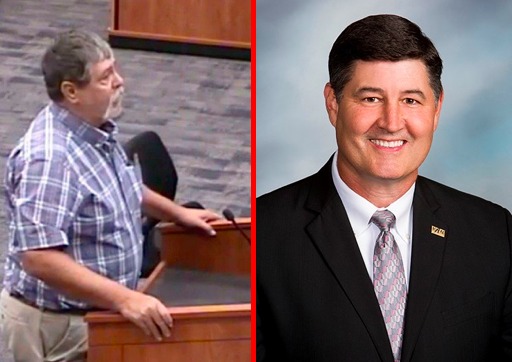 Greg Barrett recently spoke at the Katy Independent School District school board meeting in Texas. He was there to talk about the issue of bullying. Lance Hindt, the superintendent of the Houston-area district, was also in attendance.

Barrett took to the podium to explain that he was often targeted as a kid because of his legal name: Greg Gay.

“I was bullied,” he said. “Unbelievably bullied.”

Then he launched into an emotional story about the time a gang of classmates assaulted him, shoving his head in a urinal and kicking him while he was lying on the ground in the fetal position.

Barrett was left with a busted lip, covered in urine, and feeling suicidal.

“Well, I went home and I got the .45 out of my father’s drawer and put it in my mouth,” he recalled. “Because at this point I had nobody–nobody in the school system–to help me. Is that the way this is going to be?”

Then he looked directly at Hindt: “Lance, you were the one that shoved my head in the urinal.”

To which, Hindt responded… by laughing.

Afterwards, Hindt released a statement denying the allegations over “a bullying incident [that] occurred more than 35 years ago” and accusing Barrett of trying to “impugn my character and reputation.”

But a few days later, another man, Christopher Dolan, came forward to say he witnessed the assault and that Hindt was a known bully throughout middle and high school.

“I do remember, recall, one incident that happened where Lance Hindt took Greg into a bathroom,” Dolan tells ABC-13. “He was in the bathroom and put his head, into uh, into a urinal.”

“He was a bully and he let people know that he was in charge. Nobody messed with Lance Hindt, not at West Memorial Junior High and not at Taylor High School.”

Watch the confrontation below.