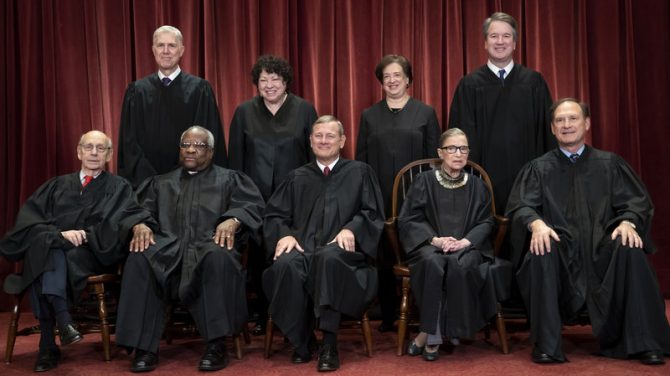 An activist group is calling on two SCOTUS justices to recuse themselves from the LGBTQ rights cases currently under consideration by the U.S. Supreme Court.

Take Back The Court is demanding Justices Brett Kavanaugh and Samuel Alito recuse themselves from all pending LGBTQ rights cases after they met with leaders from the antigay hate group International Organization for the Family (IOF) last month.

A photo of the two justices smiling gleefully alongside IOF’s leader Brian Brown was circulated on Twitter on October 29, causing alarm bells to go off among many members of the LGBTQ community and their allies.

The Supreme Court recently heard arguments in multiple cases that could have serious implications for LGBT employment rights. NOM has filed an amicus brief in at least one of the cases, urging the court to rule against LGBT rights. NOM advocates for what they claim is “traditional marriage,” and hope to take marriage rights away from same sex couples. The group’s president is Brian Brown, who boasted of a “great day at the US Supreme Court” when posting the contentious photo to his Twitter account on October 29. Brown is also the president of the World Congress of Families, which has been designated a hate group by the Southern Poverty Law Center.

Why Justices and Alito and Kavanaugh, who likes beer, posed for pictures with him as they’re considering whether LGBTQ workers should be protected from discrimination under civil rights law is anyone’s guess.

We sent the following letter to Supreme Court Justices Brett Kavanuagh and Samuel Alito after a photo surfaced of the justices posing with leaders of the National Organization for Marriage. Read it here: https://t.co/K9WPpY0e49

In its letter, Take Back The Court writes:

The credibility and impartiality of the current Supreme Court is in tatters. Posing for photographs with the president of an advocacy organization that has filed briefs in matters pending before the court makes a mockery of Chief Justice Roberts’ assertion that a judge’s role is to impartially call balls and strikes. If you refuse to recuse yourselves, this incident will further illustrate the urgent need for structural reform of the Supreme Court in order to restore a Court that understands its role is to protect individual rights and our democracy.

Related: Guess which two SCOTUS justices were caught cozying up with leaders of an antigay hate group