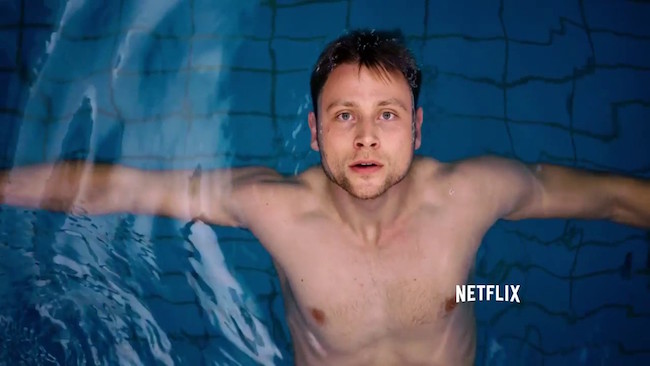 The Berlin-based actor was kind enough to give them the scoop on the sex scenes coming up in season 2, why he decided to kiss his male star on a Pride float, and whether he gets nervous before all of his full-frontal scenes.

Some interview highlights are below.

On the sex in Sense8‘s second second:

Like I said, there’s going to be more! It’s also the way Lana portrays these sex scenes; it’s more like an oil painting you like to look on, not the physical act of two people putting something into each other. It’s like a melting pot that shows what’s possible when you just think about what you feel when you have sex. It’s not that very simple, single image you have of sex; it describes a feeling you could have when you have someone you feel connected to. It’s a beautiful sex scene, which is really rare nowadays; it’s not something people like to think of as pornographic.

Related: Full-Frontal Scenes Suggest “Sense8” Actor Was Circumcised Between Roles. You Be The Judge.

On making out with Brian J. Smith on a float during São Paulo Pride:

It just happened! It was all like in a dream and it felt so good – the response of people was just so energizing and took us away. And of course people like to see us making out together and we thought it would just be a nice treat for them.

It was in the moment. [If] you see some people, you connect with each other and you feel something, you should just do it. Like on a party, you try things out and let things happen because it feels right. It’s not that we wanted to show off or show people how we really feel about each other; it’s not about that. It’s more about using this energy that was really heavy at Sao Paulo Pride and giving it back.

Related: This is Ryan Phillippe at 42

Of course I’m worried, because I don’t know [in] what context this material will be shown. Will it be something that people will just rewind because it’s so shocking, or will it be something quite natural that is just a pert of a scene that works? At some point you have to decide and I decided to trust the people I work with, and it just so happens the result was so positive that I have not so many problems with it anymore. But I’m still struggling with it, of course. It’s not something that’s so easily done.

On Germany lagging behind on legalizing same-sex marriage:

I think it’s just a matter of bureaucracy. Because what I deal with here in Berlin is one of the biggest freedoms you can imagine. Berlin is so easy and open about gay couple and marriages that it’s hard for me to understand why it’s such a problem. I think German laws and the process of pushing new laws through takes such a long time that it’s not been realised yet. But there’s two different realities here between, like, Bavaria and Berlin. I think it’s just a matter of time; but with a new generation it shouldn’t be a problem anymore.

Subscribe to Queerty for a daily dose of #entertainment #berlin #brianj.smith stories and more