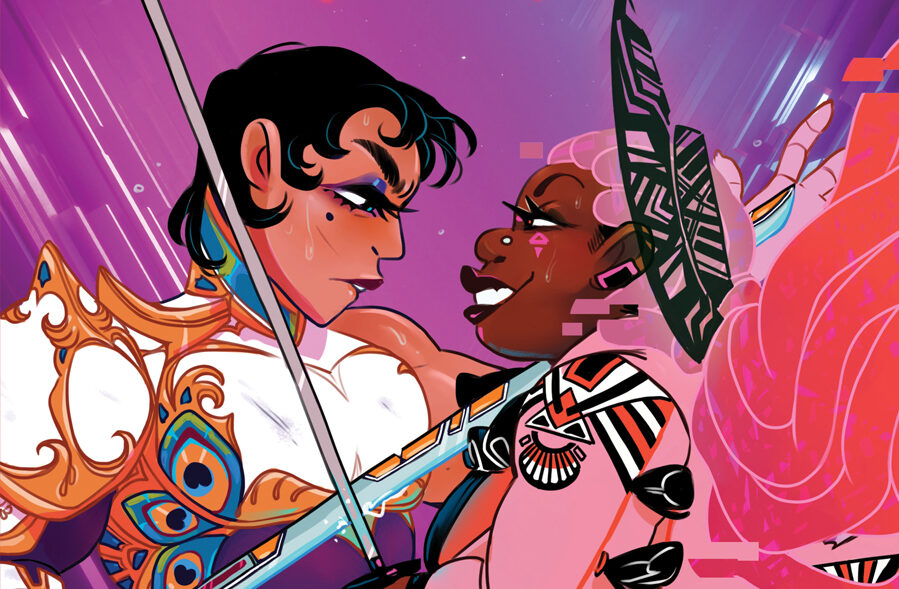 If high fantasy and gay thirst are your favorite parts of RPG play, Thirsty Sword Lesbians is the game for you.

Absolutely floored that Thirsty Sword Lesbians won the Gold ENnie for Best Game and Product of the Year!
Congrats to @GaySpaceshipGms and all the writers, artists, and editors, who worked so hard to bring this game celebrating the queer experience to our tables.
Thank you fans!!! pic.twitter.com/F4uv81O7nZ

This indie game was raised through a small Kickstarter and features a diverse queer cast of characters, so its ascent to the top of fan-favoritedom is especially remarkable.

Related: PHOTOS: These thirsty gaymers are all player ones in our book

The game’s action, full of sword-fighting and flirtation, is driven by the interpersonal tensions that elevate any tabletop RPG from just dice and sheets to a fully immersive fantasy world.

Before the game begins, characters in a party establish their “strings” to one another. These strings are based on their character class, or “playbook”, with each different kind of character having different strings to form.

These connections are determined by players answering questions about their relations to other party members.

For example, the Chosen’s playbook will have them designate “Who is just as important to me as my destiny in the group?” while the Scoundrel will answer the question, “Who was I smitten with recently, and who replaced them in my desire?”

Related: The “Queer Gaming Bundle” gives you over 500 games and helps LGBTQ creators

The game’s main mechanics are derived from the Powered by the Apocalypse game engine, extrapolated out to its highest gay power.

The Roll20 digital interface makes for easy playing with friends across video chat, which is perfect for these plague times.

Above all, the game is focused on inclusion and consideration. There’s even a pregame palette where each player can list their own world-building do’s and dont’s (for instance, a player could request that non-consensual mind control not be a part of the in-game magic system).

For RPG-watching fans with a couple hours to fill, check out this Thirsty Sword Lesbians demo with an adorable cast of queer players (and creator April Kit Walsh herself!):