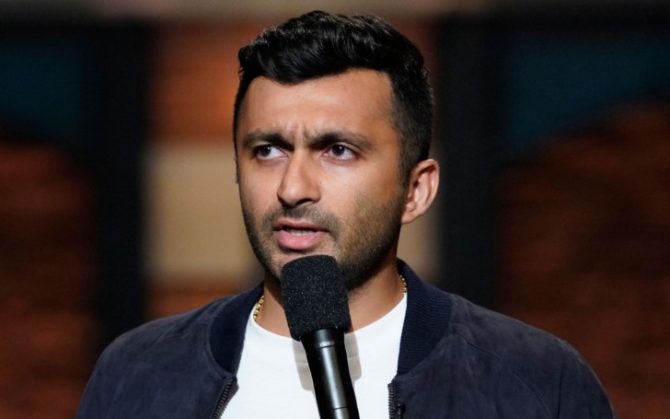 There’s been a lot of talk lately about comedians making what many consider to be off-color jokes attacking people’s identities.

In fact, they went pretty horribly.

About 20 minutes into his set, 32-year-old Patel, who was the first Indian-American writer for SNL and has opened for comedians such as Chris Rock, began riffing on the experiences of gay black men in America.

“No one looks in the mirror and thinks, ‘this black thing is too easy, let me just add another thing to it,'” Patel said.

The joke was met with crickets.

In an op-ed published by the New York Times, Patel writes:

I open by saying I live in Hell’s Kitchen, a diverse area in New York populated by, among others, gay black men who are not shy about telling me they don’t approve of what I’m wearing. I try to learn things from everyone I encounter, and one day I realize oh, this is how you know being gay can’t be a choice–no one would choose to be gay if they’re already black. No one is doubling down on hardship. … The joke bombed — total silence in the crowd of several hundred students.

The joke didn’t just bomb. It struck a nerve with several members of the audience, who began heckling Patel for cracking jokes about race and sexual orientation.

Patel responded by insisting the joke wasn’t meant to be offensive, telling students that once they graduated and entered the real world, they would better understand. But before he could finish explaining himself, his microphone was turned off.

This particular joke has worked at New York clubs full of gay people, black people and college students multiple times. I didn’t think twice about using it in a room full of smart, progressive young adults.

In an official statement, the university’s Asian American Alliance apologized for ever inviting Patel to their event, saying his remarks “ran counter to the inclusive spirit and integrity of cultureSHOCK and as such, the choice was made to invite him to leave.”

“We acknowledge that discomfort and safety can coexist, however, the discomfort Patel caused was unproductive in this space,” the group wrote on Facebook.

“I believe the student leaders were wrong to cut my mic,” he writes, “but as a person, I cannot control how people think and how they react.”

Do I think that students missed out because I didn’t finish my set? Of course I do — it’s my material. … When you silence someone you don’t agree with or find offensive, not only do you implement the tactic used by the people you disdain; you also do yourself the disservice of missing out on a potentially meaningful conversation. You cannot affect change if you are not challenged.