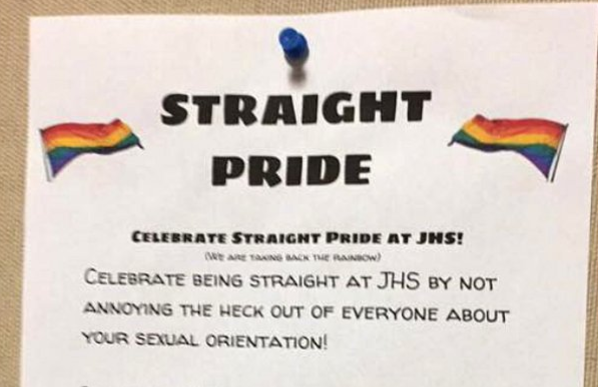 Straight white male privilege is under attack in America. Luckily, a high school student from Indiana is doing his part to ensure his future place in society remains undisturbed.

Last week, signs promoting “Straight Pride” began circulating around Jasper High School in which heterosexual students boasted they were “taking back the rainbow.”

“Celebrate being straight at JHS by not annoying the heck out of everyone about your sexual orientation!” the flier broadcasted. “Brought to you by all the students that are sick of hearing about your LGBT pride. Nobody cares about what you think you are. If you want equality, stop shoving your ideas down our throats! We have nothing against your sexual orientation. We just don’t care!”

Naturally, people weren’t happy about the fliers. School officials promptly removed them and several students responded by decorating the sidewalks outside the school with uplifting messages written in chalk.

One of the misguided students responsible for the fliers responded to his local newspaper about why he did it:

“The purpose of my flier was to not only recognize the straight community, but to also give a message to the LGBT community that equality is not effectively found in granting special privileges to minorities,” the 16-year-old said in a statement.

It went on to say that if everyone wants to be truly equal, “then nobody should differentiate themselves from society by means of protective isolation and stating that they are not like others.”

The student concluded by saying that “if everyone is equal and should be treated as such, it should not be necessary to state that certain individuals are different or special.”

We agree, kid. And when LGBTQ people are finally treated equally, we’ll be more than happy to stop “differentiating” ourselves. But until then we’re going to keep “annoying” you.