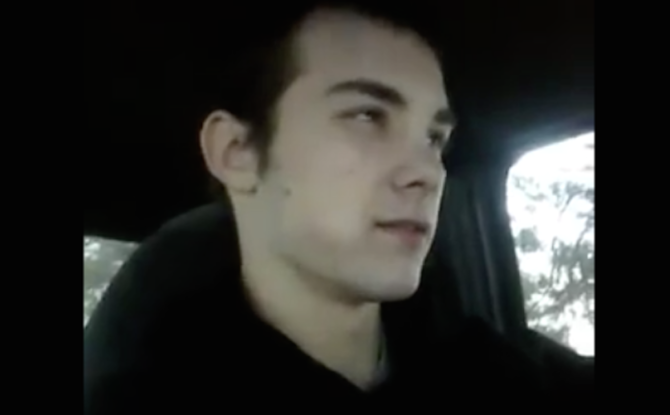 A Queerty reader has directed us to a video of a teen expressing his severe homophobia, and we feel it deserves to be seen. We must warn you that he uses highly offensive language, and if you’re sensitive to hate speech, you may want to move on.

While antigay hostility on high school campuses (or anywhere else for that matter) isn’t much by the way of news, the willingness of bigots to wear their ignorance on their sleeves has become noticeably more pronounced in our current sociopolitical atmosphere.

Permission for bullying has been given by example at the highest levels of our government, and that attitude trickles down to America’s youth, who look to adults to develop a sense of what is right or wrong.

In the video, the boy goes on a five minute rant about an “influx” of queer kids at his school. “More people are coming into the ninth grade that are gay,” he says. “I’m also going to call them fa**ots, and if that offends you, unfriend me on Facebook because I really don’t care. And it’s not so much that they’re gay, it’s that they are flashing their gayness to everybody, and that’s the part that’s pissing me off.”

He continues: “I don’t want to see two little queers walking down the hallway grabbing each other’s butts. I just can’t take that — that’s disgusting to me.”

If a straight couple wants to do the same thing, he later explains, that’s a totally different story.

Also among his list of offenses are boys who dye their hair or “act like women.” Actually, he thinks many of them aren’t gay at all, and are only seeking attention with their “queerness.”

“To be honest with you,” he says, “I don’t think most people want to see that, because it’s not that accepted — it’s really not.”

We sincerely hope this boy develops beyond his current state of ignorance, and it’s certainly possible that he will.

But unfortunately, his adolescent view of the world falls in line with a large and vocal group of adults who also perceive anything different from them as offensive and a threat. And that’s to say nothing of the fact that homophobia has been linked to same-sex attraction.

According to the 2015 GLSEN National School Climate Survey, anti-LGBT harassment at schools is on the decline, and we want to see that trend continue even in the face of a new government run by bullies.

Watch below if you want a firsthand look at what many kids are up against every day:

UPDATE: After this post went up, the video was deleted from Vimeo. You can still watch it below: