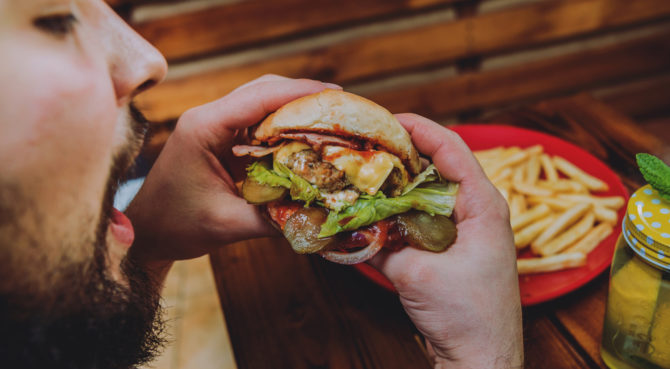 This just in, folks: Eating too much fast food and not getting enough sleep at night can turn you gay. At least according to a bizarre new study by someone named Rita Strakosha, who claims to hold an MPS in Clinical Psychology from Albanian University.

The study, titled Modern Diet and Stress cause Homosexuality: A hypothesis and a potential therapy, was published on Strakosha’s WordPress page and claims that homosexuality is caused by a person’s diet, mainly fast food consumption.

Related: New study reveal the “optimum number of people to have sex with” before you die

“Some studies show an increased rate of obesity among homosexuals,” she adds. “Gay men, lesbian and bisexual women report a higher odds of sugar-sweetened beverage consumption than straight men and women.”

That’s right, folks. According to Strakosha, homosexuality is directly tied to fats, sugars, and alcohol. She also claims cutting these things out from your diet could “decrease and… prevent the return of homosexual attractions.”

Doing so would also have the added benefit of improving one’s sleep. And, as it just so happens, Strakosha claims, sleep deprivation also contributes to homosexuality.

Strakosha recommends that people who want to “stay straight” must “steer clear of food that can be disruptive right before sleep, like heavy or rich foods, fatty or fried meals, spicy dishes, citrus fruits and carbonated drinks.”

For people who have turned gay but would like to become straight again, Strakosha recommends entering “sexual hibernation” through diet change to promote “stimulus extinction.”

“Upon re-wakening of sexual interest, the response to the previous sexual stimuli will not restart at once and at the same level as previously,” Strakosha affirms.

She continues: “Time would be needed to achieve the same level as before hibernation. Discontinuation of hibernation would be an opportune time for sexual orientation change.”

One caveat, Strakosha says, is that “sexual hibernation” might not work for everyone.

“Persons with a longer history of homosexual attractions and those with stronger prenatal or genetic factors would have more difficulty in achieving benefits from this therapy,” she says.

We should probably note that Strakosha’s study is self-published and not peer-reviewed.