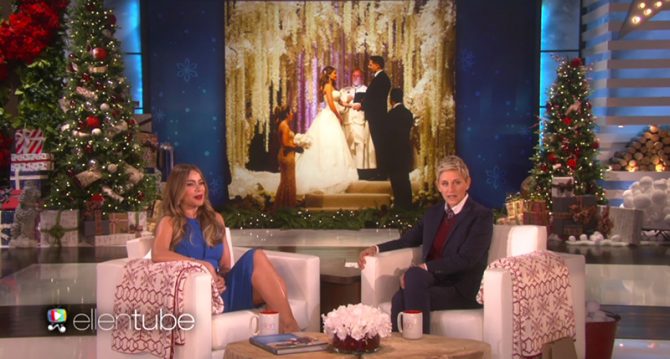 The eye-opening video was first uploaded to TikTok by user @elenag245 and quickly made its way over to Twitter, where it’s being widely shared.

In it, @elenag245 splices together several clips of Ellen making fun of Vergara’s accent.

“Ellen makes fun of Sofia’s accent, but not in a funny way, in a very cringeworthy way, and it’s very consistent,” @elenag245 explains.

In one of the clips, Ellen tells Vergara “after ten years, your accent has gotten worse!” In another, she makes fun of the way Vergara pronounces certain words. And in another, she jokes about teaching Vergara English.

For the most part, Vergara takes the jokes in stride, although there are times when she clearly looks uncomfortable as everyone in the studio laughs at her.

“I feel like if anyone said those things in real life settings, no one would be laughing,” @elenag245 concludes. “Just because you don’t understand the accent doesn’t mean the person doesn’t speak English.”

THIS
Ellen: I’m thought I would to teach you an English word
Sofia: I know English but ok…

I felt like ? when she makes fun for the way she pronounces “gift” the amount of times that I’ve been thru that… pic.twitter.com/SYMqoRTmYQ

The video has ignited quite a response on Twitter…

In hindsight, the telling moment for me about Ellen’s meanness should have been the way she made Sofia Vergara the butt of every joke when she was on her show.

as a hispanic person every time i saw sofia vergara on the ellen show i felt so angry due to the fact it was obvious ellen was mocking sofia’s accent and implied she was less intelligent or didn’t know english properly solely because she’s latina.

Reminds me of the time she showed Sofia Vergara a picture of her son and said “I love him” and then sofia said “he’s here and you didn’t want to take a picture with him Ellen” https://t.co/GDECgtlgWB

I started not to like her because of Sofia Vergara. Sofia is genuinely so nice and I felt Ellen was mocking her because her lack of English. It just didn’t feel right.

She’s done great things in her show and helped a lot of people, but she’s always been very condescending!

I legit remember telling my professor that watching those interviews of Ellen pretty much making fun of Sofia’s accent made me feel so bad bc my accent was strong like hers so it in my head it was like “y’all are gonna do that too? ”

So when are we gonna talk about the amount of micro aggressions Ellen makes towards Sofia Vergara/how much she looks down on her for having an accent??

I wanna listen to what Sofia Vergara has to say about Ellen .She is always made fun of on the show for her accent, “Fun” in a mean way. It was always the accent(English is not her first language duh )

Related: As if things couldn’t get any worse for Ellen, this happened…