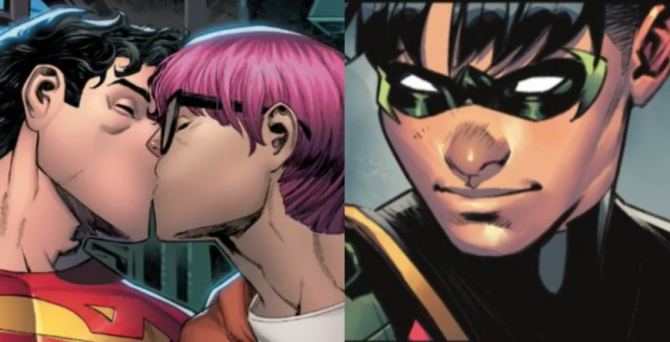 Bios: In 1938, Jerry Siegel and Joe Shuster’s Action Comics #1 was released, introducing the world to Kal-El, aka Clark Kent, aka Superman. Faster than a speeding bullet, more powerful than a locomotive, and able to leap tall buildings in a single bound, Superman would soon became one of the most widely known characters in the world. Since then, he’s been adapted to appear in radio serials, books, movies, television shows, and even a flopped 1966 Broadway production called It’s a Bird … It’s a Plane … It’s Superman. The character has also been portrayed in alternate storylines throughout his eight+ decades, even getting a super-son, Jon Kent, in the recent Superman: Son of Kal-El.

In 1940’s Detective Comics #38 by Bill Finger, the character of Dick Greyson first became Robin, sidekick to Batman. Like the Superman franchise, the dynamic duo has appeared in near-countless forms of media throughout the years. Robin has even evolved past Greyson to include other characters assisting the Caped Crusader. That includes Tim Drake–one of several Robins to fight alongside Batman in the comics.

Coming Outs: DC Comics marked National Coming Out Day in October by confirming a long-rumored development: Superman’s son, Jon, came out as bisexual in the pages of Superman: Son of Kal-El on October 9.

In the comic, Jon Kent falls for his close friend, reporter Jay Nakamura. As Jon faces exhaustion from saving the world from constant threats, the emotional bond between he and Jay deepens.

Tim Drake finally coming out is so inspiring, DC never wanted a queer Robin but after years and years of campaigning from writers and fans it finally happened

A big thank you to Meghan Fitzmartin, Belén Ortega and Alejandro Sánchez for making this moment so beautiful ?? pic.twitter.com/xb5YugEYd9

In Batman: Urban Legends #6, which hit shelves August 10, Robin, aka Tim Drake, rescues his school friend Bernard from a cult called The Chaos Monsters. As the two fight alongside one another, Tim swoons over his longtime friend. Bernard also confides to Robin (not knowing that Tim is his true identity) that a mega crush on Tim helped him come to terms with his own sexuality. Tim then has a moment of realization that he reciprocates those feelings for Bernard.

Chosen Family: Representation in superhero stories, which have become enormously popular with the Marvel and DC cinematic universes, has become something of a hot-button issue. More and more, storytellers are choosing to listen to fans and embrace diverse lead characters, including LGBTQ storylines. For these two iconic characters to now join that trend marks another progressive step.

“I’ve always said everyone needs heroes and everyone deserves to see themselves in their heroes and I’m very grateful DC and Warner Bros. share this idea,” Tom Taylor, writer of Superman: Son of Kal-El, said. “Superman’s symbol has always stood for hope, for truth and for justice. Today, that symbol represents something more. Today, more people can see themselves in the most powerful superhero in comics.”

Defying the predictions of naysayers, DC Comics even announced that sales for the coming out issue exceeded orders for the title’s inaugural issue–an event virtually unheard of in the comic industry.

“The response to Tim’s story has been more than I could have hoped,” said writer Meghan Fitzmartin in comments accompanying Batman: Urban Legends #10.. “It’s always exciting to share Tim’s journey with fans, and close 2021 with this special holiday story.”

Other DC heroes and villains, including Batwoman, The Question, Poison Ivy and Harley Quinn, have also now been portrayed as queer. And the 2021 Marvel film Eternals, which hit theaters November 5, 2021, featured the studio’s first on-screen LGBTQ relationship and kiss, between Brian Tyree Henry as Phastos — the first openly gay superhero in a Marvel movie — and Haaz Sleiman, who plays his husband.

This relatively new, queer family will only grow from here. For lack of a better word, we think that’s just super.