Fans are making quite a racket, so to speak, over tennis champion Andy Murray’s latest X-ray.

They’re not gagging because the Scottish athlete just underwent hip resurfacing surgery and now has a metal hip… but because his X-ray image appears to show off the ghastly outline of Murray’s penis resting against his left thigh.

Related: Meet Christopher Stephenson, the tennis buff who led San Francisco into the US Gay Open

Talk about a wild card! 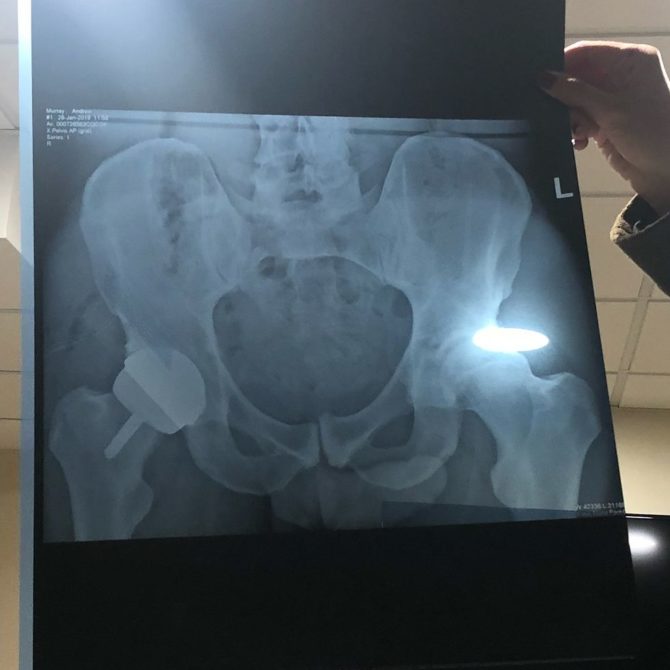 The 31-year-old, who recently announced his retirement plans, apparently had no idea he was making an NSFW reveal Instagram on Tuesday, January 29. “I underwent a hip resurfacing surgery in London yesterday morning,” he wrote in the caption. “Feeling a bit battered and bruised just now but hopefully that will be the end of my hip pain. I now have a metal hip as you can see…”

Related: Roger Federer gets distracted by tennis players’ butts, too

Well, the metal hip isn’t all that followers saw. Just check out these responses on Twitter:

Well, I saw more than I expected when I looked at the X-ray, But sending wishes for a speedy recovery. (Quite impressive considering it was after major surgery ??? ) Andy Murray

YES to Andy Murray posting X-rays of his dick, this is exactly the kind of casual thotty behaviour I stand by ??

get well soon, Andy Murray, thanks for the x-ray dick pic.twitter.com/MCCjgDAVgp

By the way, radiologists have a couple of slang terms for when penises point out an injury or an illness in a X-rays: “John Thomas sign” or “Throckmorton sign.” Murray’s penis is pointed away from his bad hip, but nevertheless, the John Thomas sign’s Wikipedia entry seems to have been recently edited recently to list “Murray’s mount” as an alternative name. Oh, Andy, the indignities!