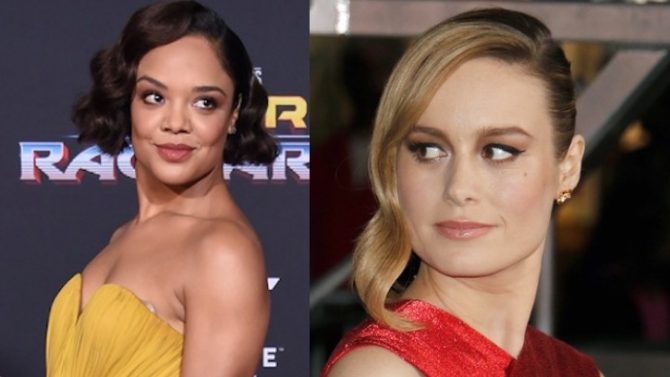 “The thing is, I think it’s dangerous for people to say too much about what they want with Marvel, because then they will tend to go the other way,” Waititi says in a new WIRED interview when the magazine asks about the Marvel/Valkyrie shippers. “You want to listen to the fans to a point. But also you don’t want to have a completely fan-made film because then it doesn’t feel like there’s any point. You want to have people surprised.”

In other words, don’t get your hopes up.

Related: Marvel’s first gay superhero to be played by this familiar and very handsome actor

Thompson — who made her Marvel debut in 2017’s Thor: Ragnarok, also directed by Waititi — stoked the sapphic speculation at San Diego Comic-Con this July when she said that “as a new king, [Valkyrie] needs to find her queen.”

I’ve decided on my costume for Halloween. Small person is being Captain Marvel. So I’m going as Carol Danvers. But instead of a Nine Inch Nails t-shirt, going to wear my “kiss more girls” t shirt. Because we allllll know Captain Marvel is a lesbian and marrying Valkyrie. pic.twitter.com/kz6skZxrxl

The Westworld actress even convinced Waititi to make Valkyrie bisexual — drawing upon the character’s sexuality in the comic books — but the director ended up deleting a shot of a woman leaving Valkyrie’s bedroom from Ragnarok.

Thompson and Larson also gave the prospective romance their stamp of approval at ACE Comic Con in Chicago earlier this month.

brie larson: how do i top lesbians?
tessa thompson: uh i’m sure the lesbians can show you right after this panel pic.twitter.com/kHXcqBkpYy

“We’re here to ship, y’all!” Larson said. “We can dig into it. I’m just telling you we’re shipping.”

Thompson added: “Brie is my real-life queen, in general. If it becomes canon, that’s cool, too.”

And after the WIRED interview, one fan took Thor’s hammer to Waititi’s logic. “Literally the MCU is made to the Marvel fandom, they even changed thing to make them more commercial,” that user tweeted. “So if we want Valkyrie and Captain Marvel flirting together, it shouldn’t be impossible tbh.”