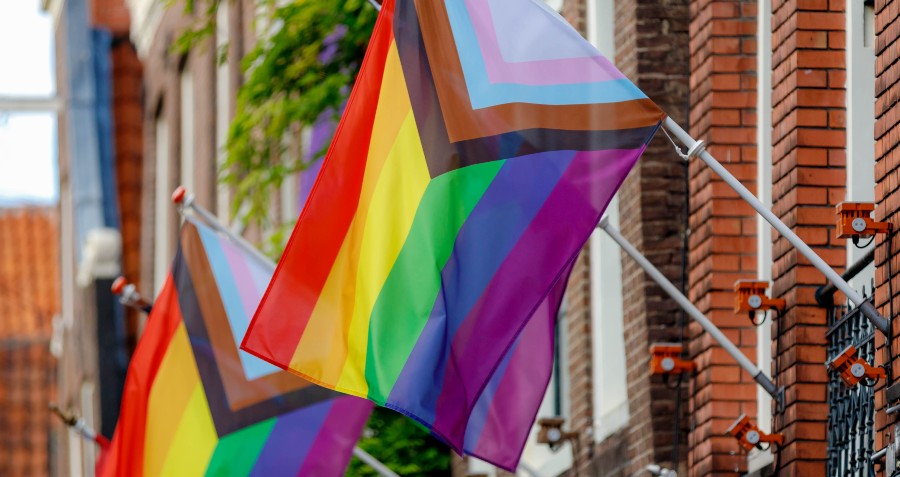 Homes displaying Pride decor in Frenchtown, New Jersey have fallen victim to a string of vandalism this week. Now, citizens and authorities are fighting back.

Over the course of August 7th and 8th, eleven Pride flags were reportedly torn down across the city. Some were badly damaged in their flagpole mounts, while others were removed entirely.

After resident Al Leigh Sotold’s rainbow flag was cut in its holder on Sunday, she placed a sign out front pointing to it and reading, “THIS IS A HATE CRIME.” On Monday, she found her sign, another rainbow flag, and a Black Lives matter sign all thrown in the Delaware river nearby.

Related: Arsonist almost sets himself on fire trying to burn down a Pride flag display

Frenchtown is, by all accounts, a rather progressive small town. They annually host Pride parades, have regular queer-centered events, and have Pride flags hanging up all over town.

Grace Fiorito, who lives across the street from Sotold, also had two Pride flags taken and a hateful message left at her family home. She says that though she’s never seen anything to this level in her 15 years of living there, she’s not particularly surprised.

“Some people think we’re in this lovely bubble, but we’re not. It happens everywhere, and here we are with hate and racism and homophobia right in our backyard and our front yards.”

Though hate can happen everywhere, the city’s folks are making it clear that it’s not accepted here.

According to both Sotold and Fiorito, local authorities were responsive, empathetic, and themselves upset at this situation.

They’ve now put out a $2,500 reward for any information leading to the arrest of this bigoted criminal, along with a large electronic sign requesting any and all possible tips about these “bias crimes”.

The community seems to be looking after each other as well in the wake of these acts.

One group of queer citizens even banded together to donate food and well-wishes to the houses affected:

Update on the LGBTQ-targetted vandalism: not knowing what else to do, i met up with @humanbyweight & some other local queers, & made loaves of French Bread & a HUGE pot of veg stew. We delivered 3 “bread+soup+🤝note” care packages to affected homes & plan to do more tonight.

This cowardly criminal’s efforts to intimidate have only put authorities on the lookout and made the community draw in closer than ever.