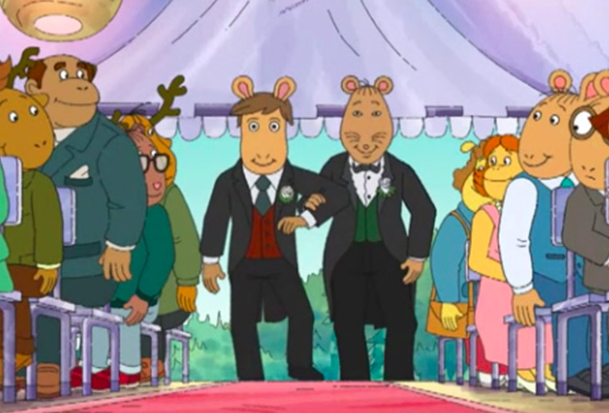 In its race to be the most draconian, antiquated state in the union, Alabama Public Television refused this week to air an episode of the beloved PBS children’s show Arthur because it depicts the title character’s teacher, Mr. Ratburn, marrying another male.

“Parents have trusted Alabama Public Television for more than 50 years to provide children’s programs that entertain, educate, and inspire,” Mike McKenzie, a spokesperson for APT, said in a statement. “Parents trust that their children can watch APT without their supervision. We also know that children who are younger than the ‘target’ audience for Arthur also watch the program.”

And so, McKenzie said, APT could not, in good conscience, air “Mr. Ratburn and the Special Someone.” Instead, Alabama residents can only view the episode by going to PBS.org.

Clearly, and also not surprisingly, the censors at Alabama Public Television have never heard of the “Streisand effect.” That said, we wouldn’t be surprised if the Season 22 premiere of Arthur ends up being its highest rated yet.

While we wait to find out, here’s what people on Twitter are saying about Alabama’s response to the gay cartoon rat wedding scandal…

this is obviously not good but “Arthur gay rat wedding” is one of those phrases that’s gonna be rattling around my brain after dementia has robbed me of my memories and mental faculties pic.twitter.com/e5twcjMxRM

The biggest surprise for me about the Arthur gay wedding was finding out that Arthur is still on TV and has 20+ seasons!!! I guess I had just assumed that Arthur had ended in the early 2000s?

Hasn't anyone told Alabama that the more gay people there are, the fewer abortions occur?

Alabama just banned Mr. Ratburn’s gay wedding episode of Arthur. I bet they also banned the episode that tells you all about the joys of a library card. Can’t have impressionable children going and *gasp* learning how the world really is!

Alabama is refusing to show the Arthur gay wedding cause the plot of the episode is that Ratburn's sister is set up as the red-herring that the audience thinks is his fiancé before it reveals his actual partner and Alabama just couldn't accept that.

Alabama Public Television censors the "Arthur" gay wedding episode, but greenlights the one where Muffy has to carry Roy Moore's baby to full term.

It was definitionally a "gay rat wedding" but also I'm pretty sure Mr. Ratburn's husband is an aardvark. https://t.co/oJVvp5mnS6

The real reason the Arthur gay wedding isn’t good representation is the only people who seem to be gay at the wedding are the grooms. What gay person doesn’t have gay friends? I hardly have straight friends! The only straight people at my wedding were my family.