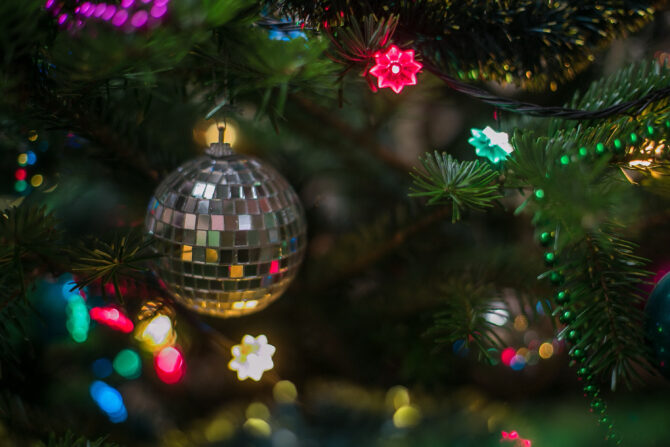 Now that the Omicron variant is officially making the rounds, you might be thinking twice about going to a blowout holiday party or hitting up the club during the break. But that doesn’t mean you can’t still have a wonderful Christmas time.

Related: Is the Grinch secretly a gay man?

Whether you’re planning a chill night at home alone, or with a partner, or are hosting a get-together, these Christmas music videos playing on your TV will offer both the perfect soundtrack and lovely visuals to get and keep everyone in the high-spirits X-mas mood.

“Santa Tell Me” by Ariana Grande

Ariana’s “Santa Tell Me” is perfect because the video shows her and a handful of friends having fun at home–just like you’ll be doing. Celebrities, they’re just like us! (But with nicer houses.)

This was the year of Lil Nas X, who was seemingly everywhere you looked–from stirring up controversy with his Satan shoes to clapping back on his haters so well it almost made us feel bad for awful people (but not really). So it only makes sense that he should appear on your Christmas playlist as well. Besides, how could we not include a song with the line, “I might bottom on the low, but I top shit?”

So, this “official video” isn’t actually an official video but whatever, it’s still worth watching. You know Gaga had to make the list.

Truly a classic. If you’re not already sick of hearing it everywhere you go it’s worth including, if only to giggle at the fake heteronormativity of it all.

This one is great for the sing-along possibilities, as it’s a lyric video. It also features some cute animation, and, of course, the heavenly voice of Freddie Mercury. What more could you ask?

Pet Shop Boys in “It Doesn’t Often Snow At Christmas”

Pet Shop Boys’ “It Doesn’t Often Snow At Christmas” can help bring the vibe back up and provide a bit of a club-like feel in case you and your loved ones are missing the feel of being crammed in a room with too many bodies. Maybe next year?

OK, this one’s not a music video, but it’s still a bop. The yuletide doesn’t get any gayer than Cher singing a holiday-themed track over a ’90s house beat with Rosie O’Donnell on backup vocals.

Here’s one for the couples! It’s a sweet song about being in big love during the holidays. The video comes from “The Kacey Musgraves Christmas Show,” and Musgraves and Sivan sound great together.

Frankly, Ed Sheeran’s lackluster stripper dance in the modified Santa costume is something we didn’t necessarily need, but who knows, maybe that’s your thing. And anyway, it’s saved by the presence of the great Elton John.

Big Freedia in “Make It Jingle”

Another one for the folks who want to dance instead of cuddle by the fire. Plus, if you missed out on the office Christmas party this year because everyone’s working remotely this can make you feel like you were there. And on the plus side, you didn’t even have to risk getting too drunk off eggnog and ruining your career.

“(Everybody’s Waitin’ For) The Man With The Big Red Bag” by Darren Criss feat. Adam Lambert

It’s the most wonderful time of the year–especially if you’re a fan of Darren Criss and Adam Lambert. The duo paired up to record a song and music video for Criss’ latest holiday release that’s the perfect blend of campy, jazzy, and oh, what fun!

Mariah Carey’s “All I Want for Christmas Is You”

Come on, you knew it was going to show up, right? This is an obvious one, sure, but it just wouldn’t be Christmas without Mariah singing about not wanting a lot for Christmas. What can we say, we’re traditionalists.