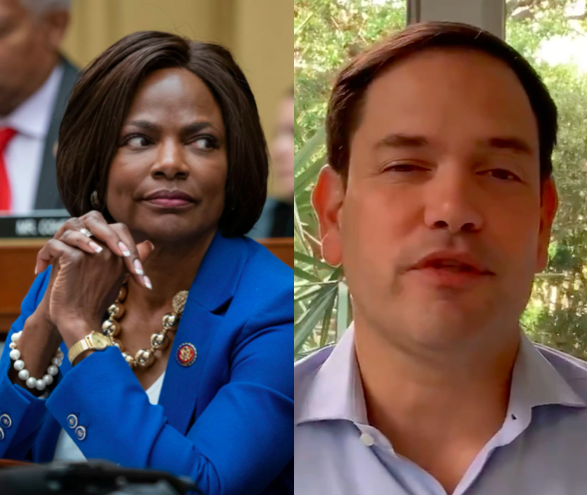 Did you hear that? It was the sound of Marco Rubio wetting the bed after Val Demings announced she’ll be challenging him for his Senate seat in 2022.

“Unlike some in Washington, I never tired of standing up for what I believe is right,” Demings said in a video announcing her candidacy this morning. “Because no one is above the law.”

In addition to being an all-around badass, Demings is a fierce LGBTQ ally.

Last year, she introduced a bill in the House of Representatives to end the discriminatory ban against LGBTQ blood donors, calling the practice “archaic.”

For some reason we cannot seem to get past tearing down people who are different than us.

Our past is so ugly in this area. We should all be trying to make it right.

The #EqualityAct will protect #LGBTQ people from discrimination in housing, employment, education, and more.

Rubio, on the other hand, opposes same-sex marriage, non-discrimination protections for LGBTQ people, and gender neutral bathrooms. He also voted against Pete Buttigieg being the first out Secretary of Transportation and Rachel Levin being the first openly trans assistant secretary for health. Oh, and he has a 0% rating with the HRC.

If she wins her party’s nomination, Demings will likely face an uphill battle, however. Democrats haven’t been doing great in Florida that last few election cycles. Trump carried the state in both 2016 and 2020 and last year two Democrats lost two House seats in the Miami area after flipping them just two years earlier.

Still, the former Orlando police chief and a rising star among Democrats would make a formidable opponent. And given the way she handled Jim Jordan like a total boss when he tried interrupting her on the House floor back in April, we’re 100% sure Rubio’s not looking forward to potentially standing next to her on a debate stage in what will doubtless be a very closely watched race.

Val Demings is running against Marco Rubio, that gives me hope.

I will never tire of supporting Val Demings because she’s ferocious & she’ll crush Liddle Marco like the traitorous bug he is #BlackWomenLead @valdemings https://t.co/vlIxJ1fokF

Val Demings is going to make Marco Rubio pay for all of his sins.

What have you done today to help Val Demings defeat Marco Rubio?

Good time to remind everyone that Marco Rubio believes people should be forced to have their rapists’ babies and Val Demings does not.