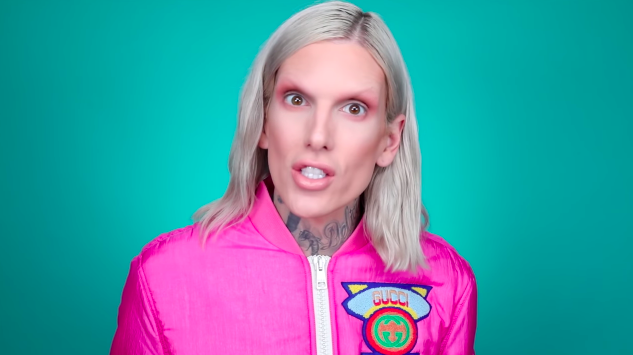 CoverGirl model/makeup artist James Charles has been fielding a PR nightmare after shocking allegations were lodged against him by fellow influencer Tati Westbrook claiming he took advantage of straight men, pressuring them into having gay sex against their wills.

For whatever reason, another fellow influencer, Jeffree Star, decided to insert himself into the drama by calling 19-year-old Charles a “danger to society” on Twitter.

“There is a reason that [boyfriend] Nathan [Schwandt] banned James Charles from ever coming over to our home again,” 33-year-old Star wrote on Sunday. “There’s a reason why I haven’t seen him since @GlamLifeGuru’s birthday in February. He is a danger to society. Everything Tati said is 100% true.”

Given Star’s own history with fetishizing straight men, however, the criticism didn’t land so well.

In 2007, before he became a beauty vlogger and when he was still an aspiring club performer, Star released the song “Straight Boys.”

The song was all about his lust for heterosexual men and included lyrical gems like “I wanna boy with juicy lips who doesn’t care I don’t have tits” and “They don’t have to tell their friends they’re getting it from both ends.”

Yesterday, Twitter user @thelightalex dug up several old tweets written by Star where he bragged about preying on straight guys, including one that reads: “I’ve had so many straight boys naked that I think I deserve a life time [sic] achievement award.”

ok so this isn’t me defending james charles at all, but jeffree star was 25 when he said this stuff and it seems pretty hypocritical of him to be tweeting and dragging james and adding his two cents when he’s said some disgusting shit in the past.. he should’ve just said nothing pic.twitter.com/4ASvepSbxZ

Others on Twitter pointed to episodes from Star’s past in which they feel he behaved just as badly, if not worse, than Charles.

There’s a video of Jeffree Star grabbing a straight guys private area without consent and tati is still friends with him? James is getting heat for straight guys flirting with him wanting to explore their sexuality lmao WITH CONSENT BTW and Tati has a problem with that funny

Star has since deleted the tweet calling Charles a “danger to society” and has begun blocking anyone who accuses him of calling the kettle black.

Now, like Charles, people are calling for him to be “canceled” as well.

So are we ready to cancel Jeffree Star yet?

jeffree star after he was exposed as a hypocrite for also harrassing straight men
pic.twitter.com/SnEkSXbUiM

Idk why Jeffree Star is so quick to call people out and “cancel” them when he should’ve been canceled YEARS ago ?

me waiting for a white woman to cancel jeffree star nowpic.twitter.com/uJ5ebxMxIe

the internet is so selective on who they want to ostracize. youll cancel james charles for hitting on straight men (and not for his racist comments) but let jeffree star thrive after calling black women gorillas? interesting

If you cancel James Charles but still stan Jeffree Star all three of you can go fall in a hole. Periodt.

Can we cancel Jeffree star as well pic.twitter.com/Qsh6k0Ab0D