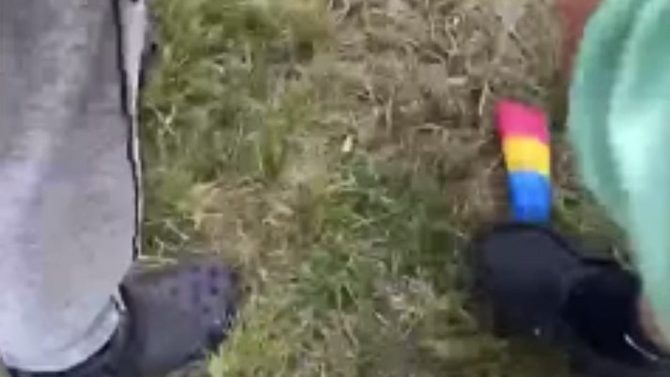 Cell phone video taken at a Florida high school has gone viral and sparked national outrage. In it, a group of students harass members of the Bartram Trail High School Gay-Straight Alliance, deface the pride flag, and are seen waving makeshift Confederate flags.

The St. Augustine Record reports that fellow students filmed the video last week. It spread across social media and prompted police to open an investigation into the incident.

The footage shows a group of students outside the high school harassing classmates with anti-queer statements such as “There’s only two genders … ” and, “Y’all have a mental illness.” Other footage of the incident shows the same group of bullying students kicking and stomping on the pride flag while waving homemade Confederate flags.

Related: Gay-hating school board official says liberals who don’t believe in freedom are threatening her life

“I think it’s really upsetting,” parent Nancy Tray told The Record. “I think anyone who sees something like this going on at their child’s school is going to be concerned. Everyone wants their child to be part of a school community that has acceptance and respect, and I don’t think that this video demonstrates that.”

School administrators, for their part, condemned the incident.

“This behavior is not acceptable and is not indicative of the culture and students at BTHS,” Christina Langston, a district spokesperson, said in a statement. “It is very disappointing that these students handled themselves in this way.”

“The students involved will receive consequences in accordance with our student code of conduct,” Langston added.

Pursuant to the investigation by police and school officials, the students seen in the video could face disciplinary action ranging from suspension to placement in alternative education classes. The perpetrators could also face mental health referrals and criminal prosecution.