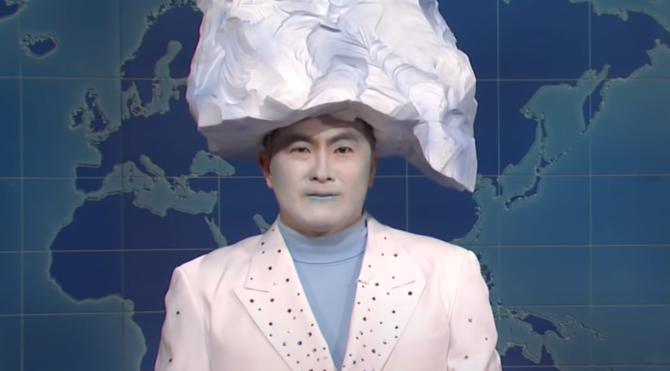 Bowen Yang delivered an instantly iconic performance on Saturday Night Live over the weekend as the ice berg that sunk the Titanic.

No longer must we debate what that ice berg would be like if it were a person, because now we know — a pop queen.

Addressing the berg’s cultural legacy, Yang explained: “That was a really long time ago. I’ve done a lot of reflecting to try and move past it. It’s one very small part me, but there’s so much going on beneath the surface that you can’t see.”

But when Colin Jost presses him to talk about the defining event, Titanic Iceberg’s true feelings come out:

“First of all, you came to where I live and you hit me. It was midnight. I was chilling. And then I hear this Irish cacophony behind me.”

“And before I turn around and go, like, what? Half my ass is gone, which was my best feature. And I’m literally injured but all anybody cares about is that like, 40 or 50 people died or whatever.”

Watch below, where you’ll also get to hear a snippet from the album you won’t want to miss:

And much ado has been made about musical guest Kid Kudi’s wardrobe choice, which was later explained to be an homage to Kurt Cobain:

Kurt Cobain was a precious soul. During a time that it was popular to shame things that went against society’s idea of normal, Kurt embraced them and advocated for them. Kid Cudi paid homage by doing the same thing. I truly LOVE to see it. pic.twitter.com/KD94wQ8ROe