The much-awaited latest entry in the Marvel Cinematic Universe from Oscar-Winning director Chloé Zhao finally hits screens this week, bringing with it a hearty dose of diversity to the franchise. Eternals follows a group of immortal aliens assigned to defend Earth from alien monsters by an even bigger alien. The group watches the centuries tick by, growing ever closer to humanity. Cut to present day when said monsters reemerge out of stasis, and the Eternals must reunite to save the world.

First things first: Eternals does, at long last, introduce the first superhero queer couple to the MCU: the Eternal Phastos (Brian Tyree Henry) and his husband (Haaz Sleiman), who even get an on-camera kiss. Both give steadfast performances, making the most of every moment they get on screen. The pair are adorable to watch, particularly as they fuss over their son together. As she did in Nomadland, Zhao indulges in photographing landscapes of natural beauty with elegant precision, giving the movie a sprawling look on par with a historical epic. Compared to other Marvel films that often substitute green screen sets for real locations, Eternals feels downright majestic. In the ostensible leads, Gemma Chan and Richard Madden both give charismatic performances that hint at bright careers ahead. Zhao makes good on the promise to diversify the MCU by adding gender and racial diversity, and featuring a disabled character, as well as one suffering from mental illness. Every performer does fine work here, with Henry and Barry Keoghan, in particular, squeezing the most out of underwritten roles. The movie also features several openly queer performers, including Sleiman, Madden and Angelina Jolie—always a welcome sight.

All that said, a convoluted mythology, huge cast roster, and the constant need to rely on heavy special effects action undermines the movie’s strengths. At 156 minutes, it also feels kind of eternal. We have to wonder what kind of movie Zhao would have made left to her own devices. We suspect it would have less CGI monsters and more ruminations on character, immortality and watching humanity evolve. This is a movie at odds with itself in many ways, though commendable for what it does accomplish in terms of diversity. We recommend it on that basis, in hopes that the next time we see Phastos and company, it’s in a story that feels less perfunctory.

In theatres and on Disney+ November 5.

Recently-engaged actress Kristen Stewart throws her hat—and her pearls—into this year’s awards race with this biopic of Princess Diana. Spencer takes place over the three day Christmas holiday in 1991, and finds said princess wrestling with psychological stress over her chilly family, tabloid obsession with her marriage, and desires to dote over her young sons. As with other biopics (Judy, Frost/Nixon), Spencer reshapes history into drama without apology. In a strange departure from any other biopic we know of, this is a horror film.

Yes, director Pablo Larraín had made a horror movie about Princess Diana, a work more on par with the stories of Daphne du Maurier or V.C. Andrews (though thankfully without the latter’s incest obsession). The movie regards Diana as a woman teetering on the brink of insanity, suffering from mental illness that drives her to bulimia and self-harm. Here, the royal family comes off as a vampire waxwork, staring down Diana with cold disregard and disgust. To the Queen, Charles, et. al.—so obsessed with tradition and pomp—Diana might as well be a baboon. Indeed, the movie also implies the Queen sees her corgis as more deserving of love in several scenes. Over the course of the movie’s runtime, we see Diana gaslighted, vomiting pearls, chastised for feeling, and generally psychologically tortured.

This ain’t The Crown kids, and Spencer has the unfortunate circumstance of following Season 4 of that show, which also covered similar territory with more nuance. Stewart gives her all in mimicking Diana’s mannerisms and voice, and at times, does an uncanny imitation. The movie also includes a queer twist, which brings much-needed tenderness to an otherwise frigid story. Viewer reaction to Spencer will vary in the extreme—anyone looking for the empathy or activism that made Diana so beloved and important won’t find them here. With that in mind, we’ve never seen another biopic quite like this before, and applaud Larraín and Stewart for their bold abandon. Love it or hate it, Spencer is a fascinating film.

The Legit: Head Over Heels

The music of The Go-Gos comes brings to life a 16th-century romance in this stage musical. Alaska Thudnderf*ck headlines this new production at the Pasadena Playhouse, which combines a dance party, a rock concert, and traditional theatre into a one-of-a-kind interactive experience. In terms of story, Head Over Heels tells the story of Queen Gynecia (Alaska) and King Basilius (Lea DeLaria), heads of a royal family in desperate search of purpose and happiness. The show mirrors their plight by using the music of the Go-Gos as part of the action: popular songs “We Got the Beat,” “Our Lips are Sealed,” and “Heaven is a Place on Earth” all get the showtune treatment here. With a cast that also features George Salazar, Tiffany Mann and Shanice Williams, Head Over Heels marks theatre’s triumphant return following the COVID-19 pandemic. Experience it with a show like no other.

Previews begin November 9. The official opening is November 13 at the Pasadena Playhouse.

Drag Race alums Trinity the Tuck, Symone and Gigi Goode host this special event at Los Angeles’ historic downtown club Precinct this week. All three queens take to the stage for special performances alongside Rubber Child, Rosy Thorn, Ladon Amour and Kyra Jete. Dance, drink and mingle the night away to the beats of resident DJ Mateo Segade in celebration of life.

Speaking of dancing, dancefloor diva Kylie Minogue drops her latest single this week, a duet with fellow pop scion Jesse Ware. Set to a disco-riffic beat (complete with symphonic synths, no less), the song is all about living life to the fullest by dancing, kissing and…well, use your imagination. It’s the latest single off Kylie’s upcoming dance compilation DISCO: Guest List Edition due out next year. It’s a great warm-up to a resurgence of dance and nightlife. Who here isn’t ready for that?

The Nibbles: The Disappointments

A reader tipped us off to this new Los Angeles-based web series, a new dark comedy about queer men living in their 50s. The Disappointments centers on Ray (series creator Rich Burns), a struggling middle-aged writer. After the suicide of his ex-boyfriend, Ray commiserates with his longtime friends Gary (Gedde Watanabe), a struggling sitcom actor, and James (James Campbell), a talent booking agent for a cruise line. Can all three still find true happiness and stability, even after 50? The Disappointments deals with familiar woes of dating and questionable finances, as well as hereto-unaddressed questions of the future of queer men. What’s a gay guy to do when life didn’t turn out as planned, and when his life clock turns red? Burns, Campbell and Watanabe have undeniable chemistry together, and the show has some very funny moments as the three struggle to get their lives back on track…assuming they were ever on track to begin with.

Episodes 1-3 debut on YouTube on November 8. New episodes every Monday through December 6. 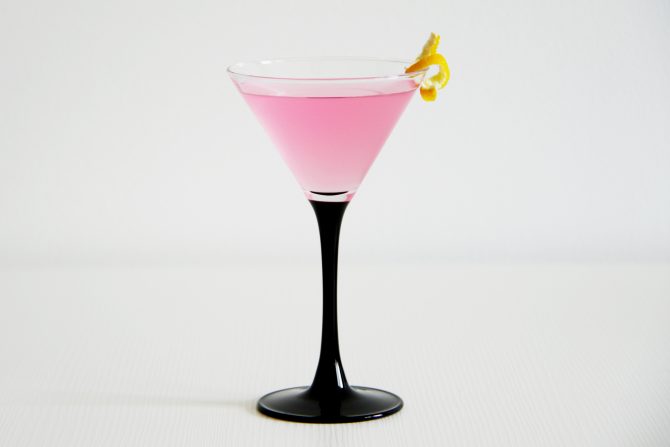 In honor of the late Lady Diana Spencer–and, of course, the release of Spencer–we offer up this week’s libation: a martini that takes its namesake from the dear departed queer icon. Much like the woman herself, the Lady Diana has the appearance of elegance and class. And much like its namesake, the cocktail leaves one hell of an impact.

Mix ingredients in a cocktail shaker over ice. Shake. Strain into a martini glass. Serve with a lemon peel garnish.