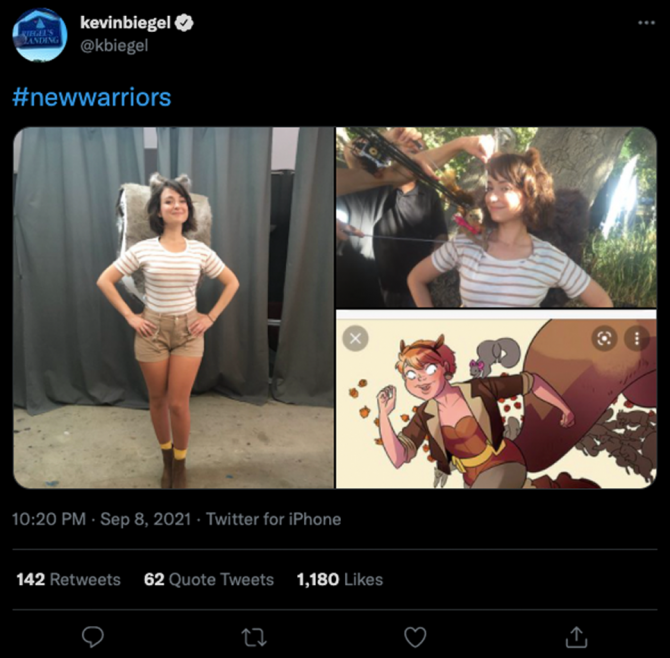 A former showrunner for the Marvel live-action series New Warriors has made public statements accusing Marvel Studios of cancelling the show before it premiered for being “too gay.”

Gizmodo reports that Kevin Biegel, known for creating the campy cult series Cougar Town, took to Twitter last Wednesday night to air his ire before promptly deleting the tweets. The website, however, managed to capture some of the tweets, which offer an inside look at the tensions behind the scenes.

To recap: Marvel originally greenlit the live-action series New Warriors to debut on the ABC cable network Freeform back in 2018. Actress Milana Vanytrub would have portrayed the cult hero Squirrel Girl in the series which would have had a campy comedic tone. A pilot episode went before the cameras in 2017 and Freeform ordered a 10-episode season, only to pull the show the following year. Ultimately, Marvel canceled the show without airing the pilot anywhere.

Now Biegel places the blame squarely on a Freeform executive who he said pulled the plug over the show’s LGBTQ content.

“A SINGULAR power that be killed that show,” Biegel claimed. “Because it was too gay. A rich, straight, Brentwood turd. He got fired for being vile at his company. We, on the other hand, live.”

Another now-deleted tweet showed the image of a script page with a character describing herself as “Black. Queer. Powered.”

“I have nights where I can’t fall asleep because I get so mad we couldn’t have characters say stuff like this,” Biegel said of the image.

The news comes amid a growing push by fans to see more LGBTQ content in the Marvel Cinematic Universe. The Eternals, set for release later this year, will feature the first identifiable queer hero in Brian Tyree Henry’s Phastos, who, in the film, is married to a man played by Haaz Sleiman. The studio had previously endured criticism for announcing the inclusion of a queer character in Avengers: Endgame only to reveal the character as a bit part played–perhaps as a joke–by one of the film’s directors.

At the time of this writing, neither Marvel nor parent company Disney has commented on Biegel’s allegations.