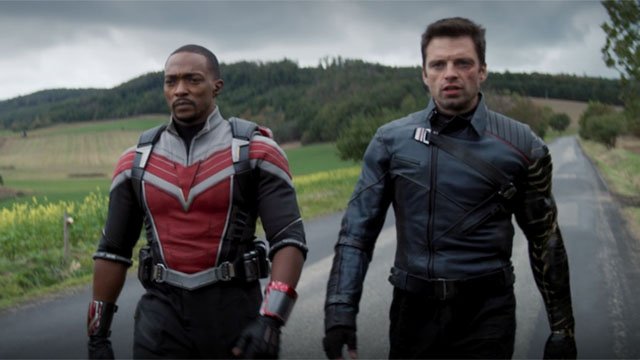 The Falcon and the Winter Soldier star Anthony Mackie has weighed in on his feelings that his character, Sam “Falcon” Wilson and his close, fellow superhero Bucky “Winter Soldier” Barnes (played by Sebastian Stan) might be gay. In sum, Mackie gave a very awkward answer, in which he seemed to blame the audience for wanting to see gay characters on screen.

First things first: we don’t think Anthony Mackie is a homophobe. That said, in a new interview with Variety, Mackie shared his thoughts on “shippers” hoping for some Sam/Bucky romance.

“So many things are twisted and convoluted. There’s so many things that people latch on to with their own devices to make themselves relevant and rational. The idea of two guys being friends and loving each other in 2021 is a problem because of the exploitation of homosexuality. It used to be guys can be friends, we can hang out, and it was cool. You would always meet your friends at the bar, you know. You can’t do that anymore, because something as pure and beautiful as homosexuality has been exploited by people who are trying to rationalize themselves.”

“So something that’s always been very important to me is showing a sensitive masculine figure. There’s nothing more masculine than being a superhero and flying around and beating people up. But there’s nothing more sensitive than having emotional conversations and a kindred spirit friendship with someone that you care about and love.”

Props to Mackie for pointing out that homosexuality is beautiful, and that heterosexual men have a right to show affection and emotion with one another. On the other hand, we’re not quite sure what he means by “exploitation of homosexuality” in this context. Plenty of films and shows have used queerbaiting as a means of building an audience, but that doesn’t really seem like the case for Sam and Bucky.

More importantly, to lay blame for the problem on “people trying to rationalize themselves?” That almost makes Mackie sound like he blames gay people in the audience for wanting to see themselves represented on screen.

Fans have long cried out to see LGBTQ superheroes join the MCU, and the franchise’s films and TV shows have long sparked fan speculation about queer characters and relationships. Fans thirsted over Chris Evans’ Captain America’s relationship with Bucky Barnes, which prompted “shipping” cries. Others have hoped to see Brie Larson’s Captain Marvel come out as a lesbian.

Ironically, in the same interview, Mackie addresses his own childhood desire to see black superheroes on screen, and what it means to fulfill that dream. Does he not realize queer people feel the same way?

We also find it odd that Mackie would display hostility toward audience members reading his character as gay. Other actors entangled in “shipping” debates–Xena’s Lucy Lawless, Star Wars’ John Boyega and Oscar Isaac, even Mackie’s co-stars Chris Evans and Sebastian Stan–have all embraced audience theories about their characters’ sexualities.

Once again, we do not think Anthony Mackie is a homophobe. Besides his remarks praising the beauty and purity of homosexuality, he’s played queer characters in the film Brother to Brother and most recently, in an episode of Black Mirror. But to be clear, audiences wanting to see Sam and Bucky or any other close-knit characters as gay has nothing to do with perversion. It’s simply an issue of representation, or lack thereof.