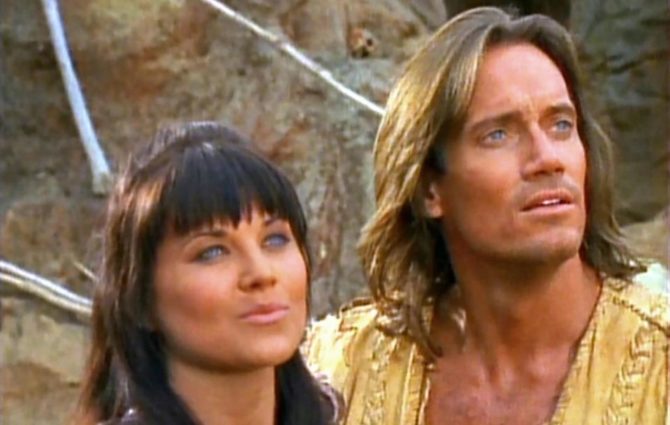 Lesbian icon, straight ally and Xena actress Lucy Lawless ripped into her Hercules co-star Kevin Sorbo on Twitter this week after Sorbo tweeted what appeared to be an encouragement of the attempted coup at the Capitol building.

For the uninformed, Trump’s allies on Fox News, OAN and on the internet have furthered the baseless and debunked theory that the terrorists who attacked the Capitol were not actually Trump supporters, but were actually far-leftists in disguise. Twitter actually flagged both O’Handley and Sorbo’s tweets with a “manipulated media” warning.

No, Peanut. They are not Patriots. They are your flying monkeys,homegrown terrorists, QAnon actors. They are the douchebags that go out and do the evil bidding of people like you who like to wind them up like toys and let them do their worst. #keepingYourFilthyHandsclean #enabler

“No, Peanut,” Lawless tweeted. “They are not Patriots. They are your flying monkeys, homegrown terrorists, QAnon actors. They are the douchebags that go out and do the evil bidding of people like you who like to wind them up like toys and let them do their worst.”

The jibe takes on a very personal dimension considering Sorbo & Lawless’s history together. New Zealand-born Lawless became a star in the US when she appeared as Xena opposite Sorbo’s Hercules in three episodes of Hercules: The Legendary Journeys. The character proved so popular that she landed her own spinoff, Xena: Warrior Princess. Lawless & Sorbo would continue to work together on both series, and in a subsequent animated film that re-teamed their characters. The pair also frequently appear together at fan conventions.

Kevin Sorbo has attracted criticism in the past, both for his support of Donald Trump as well as for perceived antisemitic remarks. Lawless, by contrast, has become an outspoken environmentalist and ally of the LGBTQ community, having joined the activist group Greenpeace and championed marriage equality. Xena maintains a devoted lesbian fanbase, and Lawless is widely regarded as something of a queer icon.