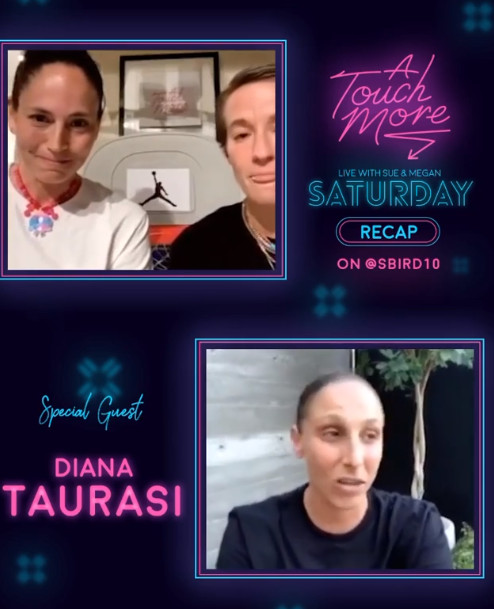 Rapinoe & Bird hosted two other sports stars, basketballers Diana Taurasi and Penny Taylor. Their chat encompassed a wide range of subjects, including their past travels as sports stars. When the subject of Russia came up, Rapinoe didn’t hold back.

“Don’t tell them I’m gay!” Rapinoe pleaded, alluding to Russia’s homophobic laws and violent treatment of LGBTQ people. Taurasi injected that she’d traveled to Russia several times, and that most Russian citizens actually don’t mind queer people. Putin, Taurasi pointed out, is a big source of the nation’s homophobia. Since taking office, Putin has stoked the fires of hate and put in place harsh laws that target and attack LGBTQ Russians.

What can I even say about this one. @sbird10 @dianataurasi This was epic.

“Well Putin… Putin seems pretty gay,” Rapinoe blurted. “I mean… Putin’s basically a drag queen, his whole thing on the horse, I’m like, was this a big drag show, Putin? All you need is like a fur cape down your back and like, you coulda fooled us.”

Although same-sex activity is legalized in Russia, LGBTQ people have few other rights. They are not allowed to adopt, and in 2013 a law was passed banning any “gay propaganda” that could be seen by minors. This effectively bans Pride marches and any positive representation of gay lives in the media. In the province of Chechnya, journalists have documented purges of LGBTQ citizens who disappear into the night.