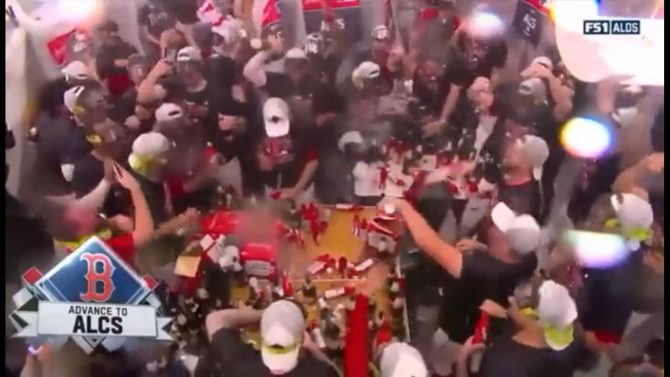 The Boston Red Sox celebrated their big win in the American League Division Series, and with an unexpected song to accompany the festivities. Following the victory, the team retreated to the locker room, cracked open champagne and beer, and partied down to Robyn’s “Dancing on My Own.”

“Dancing on My Own” is, of course, a staple of queer dance clubs and parties the world over. The Red Sox didn’t celebrate to Robyn’s original recording. Rather, they busted out the updated remix from Calum Scott and Tiësto for their victory dance. Several players also had to don goggles. Nothing like keeping that burning liquid out of the eyes.

Related: People around the world are celebrating baseball pro Bryan Ruby coming out as gay

Amid the spurts of foamy liquid, player Kiké Hernández pulled off his shirt in triumph. We call that a triumph for the man, his team, and any outside observers as well.

Here’s the full video from FOX Sports of the Red Sox celebrating with the Calum Scott and Tiesto version of “Dancing on my Own” after winning the ALDS.

Alex Verdugo spinning beers, a shirtless Kiké Hernandez, and some great harmonization. This year’s bunch is a fun one. pic.twitter.com/RvrzXdsAfF

Hernandez, for the record, is a man known for his dance moves.

In an even more impressive move, the players also seemed to know the lyrics. We call that an evolution–the team not only seems comfortable performing to a gay anthem, but actually can sing along. We also call that an improvement: The Red Sox’s official pop song is Neil Diamond’s “Sweet Caroline,” (shudder) a song about Diamond’s crush on a then-11-year-old Caroline Kennedy. Enough said.

The Red Sox close out the season #2 in the league, with 92 wins and 70 losses. The team also picked up wins in the aforementioned ALDS and the American League Wild Card game.