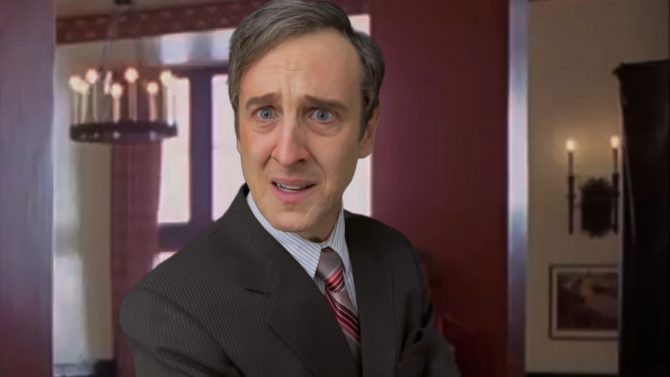 How’s this for deconstructionist?

Actor and comedian Jack Plotnick has released his latest sketch comedy video, timed for this Halloween season. That makes sense: the vid parodies the horror classic The Shining, revealing the source behind so much of the weirdness. Apparently, two men were trying to conceal their affair.

The video, titled “Decoding Bill Watson,” centers on Bill Watson (played alternatively by Plotnick, and by Barry Dennen in outtakes from the movie), and his inexplicable function in the plot. Plotnick suggests Watson had a secret affair with his boss, Stuart Ullman (Barry Nelson), and that Watson’s weird behavior results from him trying to conceal their love.

Related: Gay ‘Shining’ Sketch Is Quite A Fright

Oh, and Watson apparently has a deformed belly button so shocking it could drive a man to murder his family. So, that’s fun.

We’re guessing Plotnick has also seen the excellent, if mega-weird, documentary Room 237, a collection of ridiculous conspiracy theories about hidden messages buried in the movie. Strange that nobody speculated a deformed belly button could have been involved there.

Have a watch and a giggle and a scream. Hey, the retro 70s fashions were always the scariest thing in The Shining.