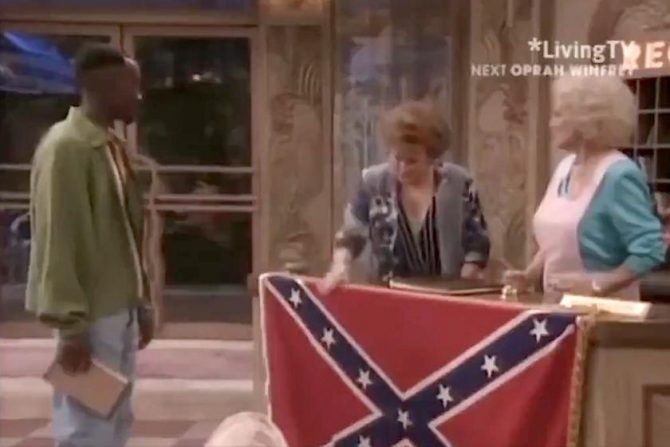 An old clip from The Golden Girls long-forgotten spin-off series The Golden Palace featuring Don Cheadle has been recirculating on social media and it may be more relevant today than it was 28 years ago.

In the scene, Cheadle plays the manager of a hotel being run by Blanche, Rose, and Sophia. Blanche is seen hanging a racist Confederate flag in the hotel’s lobby. When Cheadle’s character asks why she’s displaying it, clueless Blanche says it simply brings her “wonderful family memories.”

That’s when Cheadle schools her on what the flag really represents.

“This flag, Mrs. Devereaux, is not about college football games or quilting bees or fried chicken on Sunday,” he says. “It’s about colleges that won’t let me in. It’s about companies that won’t hire me. It is about crosses being burnt front lawns today–not an evil past, Blanche, today. And not just in the South, all over. The North is just as bad.”

Later in the episode, Cheadle explains, “The legacy of that flag is alive every time I’m walking down the street with a group of my friends and I see a white person cross over to the other side because they’re afraid. So please don’t tell me about that flag, I’ve battled that flag all my life.”