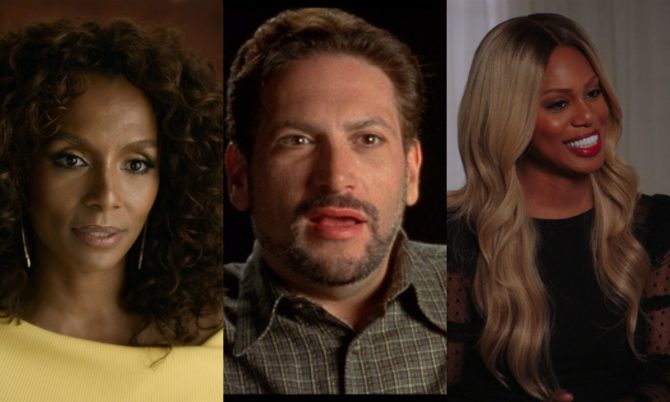 The Queerstory Lesson: The Celluloid Closet/Disclosure/Visible: Out on Television

We don’t call it a binge for no reason, folks.

With pride month now in full swing, we think a crash course in the history of queer people on screen is in order. As such, we suggest a marathon of the three best films ever made on the subject. The Celluloid Closet, from directors Rob Epstein and Jeffery Friedman, traces the origins of gay and bisexual characters in the movies all the way back to the early experimental short films of Thomas Edison (yes, we’ve really been around that long). Featuring commentary by Gore Vidal, Tom Hanks, Susie Bright, Whoopi Goldberg, Ron Nyswaner and more, the film uncovers the nasty stereotyping that led gay men and women to be seen as pitiful, doomed, or violent criminals.

Disclosure, from director Sam Feder, focuses on transgender representation specifically, and features a cavalcade of showbiz trans people sharing memories of the images that shaped their own self-worth, and how some of the most positive representation of transgender people is often problematic.

Visible: Out on Television, directed by Pride 50 honoree Ryan White, explores the history of LGBTQ people on both sides of the television screen, and features interviews with writers, directors, actors and media personalities queer and straight alike. The five-part series, much like the two other titles listed here, also explores how good intentions can lead to problematic representation, and how determined artists can do more than just change the face of media–they can change the entire world.

That change, dear reader, is part of why we have a pride month in the first place. What better way to celebrate?

Visible: Out on TV streams on Apple TV.