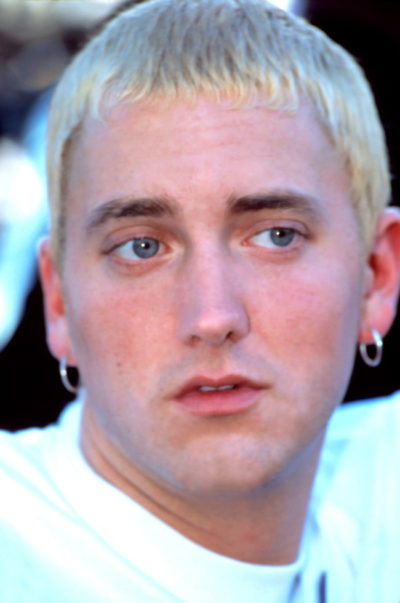 He’d also like to say that “all you lil’ fag*ots can suck it / No homo, but I’ma stick it to ’em like refrigerator magnets.”

Those are just a few readily available examples of Eminem‘s lyrical preoccupation with the gay community, which has been consistently problematic for almost two decades.

Nevertheless, Sir Elton John really doesn’t think Eminem is homophobic at all, if recent comments he made during Apple’s Beat 1 show are to be believed.

The 70-year-old pop icon says he’s “always a supporter of the people that are getting trashed,” and he’s never been particularly offended by Eminem’s lyrics.

“I listened to the whole of The Marshall Mathers LP when I drove to a show in South Hampton and I was floored by it.

And I thought how could anyone think this is… he’s just writing about the way things are.”

In case you don’t have the album currently cued up on your Technics turntable, it contains songs like “Criminal,” in which Eminem casually crows:

My words are like a dagger with a jagged edge /

That’ll stab you in the head, whether you’re a f*g or lez /

Elton’s John’s charitable interpretation of Eminem’s lyrics is probably due to the fact that the performers are friends: Apparently John even came by to offer support when Eminem was recovering from drug addiction.

“Never in a million years did I think he was homophobic,” he says.

Nor Axl Rose, for that matter.

“I’ll fight for anyone who is misunderstood and misrepresented by the idiots out there.”

So maybe we’ve totally misunderstood what Eminem’s talking about in “Rap God” when he says he wants to break “a table over the back of a couple faggots and crack it in half.”

Maybe he’s being a big flirt.