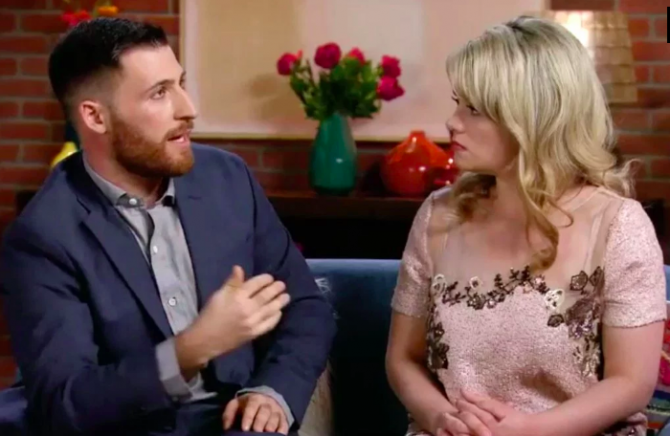 Things got particularly messy between one of the couples on the season finale of Lifetime’s Married at First Sight this week.

Contestants Kate Sisk and Luke Cuccurullo announced that, since the season wrapped, they have divorced and are never, ever, ever getting back together.

The premise of the show is pretty straightforward: Producers pair up complete strangers, who agree marry after meeting for the first time and then live together as a couple for eight weeks afterwards.

During last night’s reunion episode, Luke claimed his relationship with Kate broke down because she was constantly pressuring him about sex. Not only that, but sex with her was, in a word, unsatisfying.

“I wasn’t having normal reactions that you would normally have after having sex,” he recalled. “I wasn’t happy. I was sad.”

He added, “I was really mad at myself. I was upset that I was having sex and didn’t want to have sex.”

Luke went on to say that, during their honeymoon, he asked Kate if she thought he was gay. Her response caught him completely by surprise.

Kate whipped out her phone and presented him with a list of 40 reasons–40 reasons!–why she thought her husband was into dudes.

“I only brought it up because you said, ‘What? Do you think I’m a homosexual?'” Kate explained during the tense reunion.

“Your Facebook page says you’re interested in men and women and it still says to this day that you’re in a relationship with a man!”

Luke responded by claiming it was a joke between him and one of his college buddies, who both changed their statuses to be “funny,” which only made Kate more upset. She said she was convinced he was “hiding something” about his sexuality.

“I don’t believe it,” she replied. “You have a lot of friends that are gay and I don’t understand how it could be funny for you to put [that] on your Facebook.”

They continued to argue throughout the reunion, but in the end, Luke apologized to Kate for how he treated her.

The moral of the story? So many! But mainly: Don’t marry a complete strange on a reality TV show.