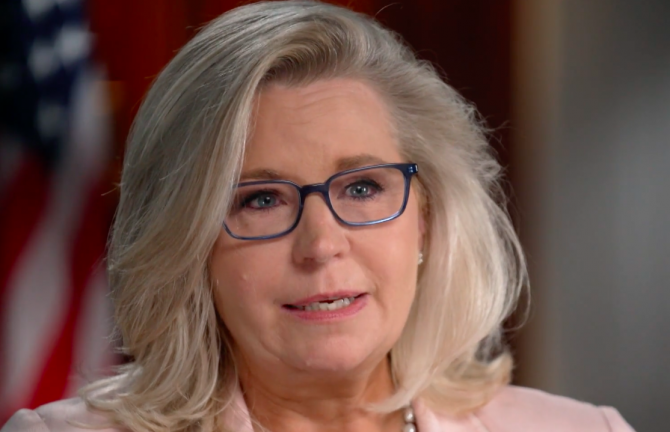 Though the Supreme Court settled this debate half a decade ago, Liz Cheney, a once fierce defender of “traditional marriage,” despite having a married lesbian sister, says same-sex couples deserve the same freedoms as everyone else.

Speaking to 60 Minutes yesterday, Cheney said her past opposition to gay marriage was “wrong.”

“I was wrong,” she conceded. “It’s a very personal issue, and very personal for my family. I believe that my dad was right. And my sister and I have had that conversation.”

“Freedom means freedom for everybody.”

Cheney famously broke with her family on this issue during her failed run for Senate in 2013, during which she opposed marriage equality. Her homophobia caused a rift with her sister, Mary, and her wife, Heather Poe, who took to Facebook to publicly blast her.

“Liz has been a guest in our home, has spent time and shared holidays with our children, and when Mary and I got married in 2012 — she didn’t hesitate to tell us how happy she was for us,” Poe wrote. “To have her now say she doesn’t support our right to marry is offensive to say the least.”

Speaking to 60 Minutes, Cheney said she and her sister have since reconciled, adding, “I love my sister very much.”

“I was wrong. I was wrong.” says Rep Liz Cheney about condemning same-sex marriage in 2013, a position that caused a split with her sister Mary, who is married to a woman. Rep Cheney says the sisters are now reconciled. “I love my sister very much.” https://t.co/EwRrkWDcT8 pic.twitter.com/KEdlqibZoJ

But before anyone goes cheering for Cheney suddenly deciding that gAy MaRrIeD pEoPlE dEsErVe FrEeDoM tOo, remember that, as a congresswoman, she holds a 0% rating with the HRC and has solidly opposed LGBTQ rights for years and years.

In fact, just this past February she voted against the Equality Act, the bill seeking to add protections for the LGBTQ community in federal anti-discrimination law.

In February, Liz Cheney voted against the Equality Act, which would finally enshrine protections for the LGBTQ+ community in federal antidiscrimination law. https://t.co/mUEi5ifzLi

—Liz Cheney, who voted against the Equality Act in 2021.

Liz Cheney threw her own LGBTQ sister in the bus to win an election. I wouldn’t count on her being an ally.

On one hand, @Liz_Cheney went on @60Minutes and said she was wrong to oppose gay marriage

On the other hand, gaslighter @RepLizCheney went onto the floor of the House on 2/25 and voted against the Equality Act pic.twitter.com/ma4JSUdcor

Liz Cheney is on 60 Minutes trying to win some of you over. DON’T TRUST LIZ CHENEY.

She voted AGAINST women’s reproductive rights 2 days ago. How many decades will it take for her to come around?

Liz Cheney now supports gay marriage — whereas the far-right Supreme Court is potentially going to reverse itself in the next 18 months and say states can ban it again.

Liz Cheney crossed a very low bar three decades late. Her sister has been with her wife since 1992 and they married in 2012. #TheView

Remarkable that Liz Cheney’s sister has been with her partner since 1992 and married since 2012, yet Liz has only *just now* publicly said she was wrong to oppose gay marriage. I’m all for progress, but everybody needs to recognize how long it took her to change her mind.

“In February, Liz Cheney voted against the Equality Act.” I’m sure she’ll apologize at some point. https://t.co/2xZru8ZEFU

It is entirely possible to recognize Liz Cheney's moment of character in standing against her own party regarding the Jan. 6th attack on the U.S. Capitol without turning her into a martyr. She is responsible for enabling Trump for years. Stop putting her on a pedestal.

Stop lauding Liz Cheney. She voted for Trump twice, voted with him 93% & reiterated on #60Minutes that she considers the most basic elements of Biden's agenda to be extremist. She stood against voting rights. She voted against the #EqualityAct and her sister is gay. Stop already.

Don't be fooled. Liz Cheney's turnabout on gay marriage is due mainly to her trying to find more sympatico voters. She's still a conservative hack.