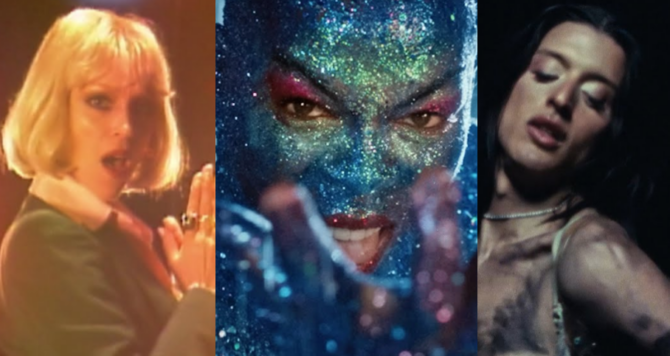 As 2021 comes to an end, there’s a lot to brag about when it comes to queer artists in music. Every year we get more and more queer representation in music, and this year proved that.

With new singles from Kim Petras, Hayley Kiyoko, and King Princess, we’ve been blessed with new songs from our favorites, but there’s also been a number of full length albums released by queer artists this year, and many of them were even nominated for Grammys.

Nonbinary, LGBTQ+ rights activist Mykki Blanco released their fifth album this year. With a five year gap between their last album (Mykki, in 2016), fans were ready for some new music, and Blanco delivered. With a mix of R&B, house, and funk, Broken Hearts & Beauty Sleep was a record with a new sound for Blanco.

Transgender and nonbinary (she/it) musical artist Arca released a whopping four albums this year. The Venezuelan musician, singer, and composer is based in Barcelona, and its Kick series of five albums features artists Bjork, SOPHIE, and Sia. Her albums this year span more than a few genres, from electronic to reggaeton to a dreamy conclusion with kiCK iiiii.

serpentwithfeet’s sophomore album DEACON came in March of this year when we needed a promise of Spring. The Brooklyn-based artist grew up in a church choir and the gospel influence is clear in his music with songs like “Hyacinth,” but you really can’t miss the sweet and endearing “Same Size Shoe.”

Todrick Hall is known for his snappy pop hits and embracing both his masculine and feminine sides, and that’s exactly what he gave us with Femuline. “RAININ’ FELLAS” provided both a catchy summer banger and a music video with more of Hall’s impressive dancing, featuring choreography by Lady Gaga collaborator Richy Jackson.

British artist Arlo Parks released her debut album this year to critical acclaim. With fans like Michelle Obama, collaborations with Phoebe Bridgers, and her album reaching number three on the UK albums chart, the bisexual musician’s career is off to a promising start. She even has two Grammy noms: Best New Artist and Best Alternative Musical Album.

5. Call Me if You Get Lost — Tyler, the Creator

Tyler, the Creator’s sixth studio album Call Me if You Get Lost received rave reviews this year and made many other year-end lists than this one, hitting number 2 on Billboard’s 50 Best Albums of the year. With a Grammy nom for Best Rap Album and featuring big artists like Lil Uzi Vert, Pharrell Williams, and others, Tyler, the Creator proves that his success as an artist only continues to grow.

St. Vincent has only gotten more popular over time, and her sixth album Daddy’s Home proves why. With her signature guitar riffs and psychedelic vocals, St. Vincent added another memorable entry to her discography. Produced alongside Jack Antanoff, the album was inspired by her father’s release from prison and was nominated for Best Alternative Music Album.

3. In These Silent Days — Brandi Carlile

Brandi Carlile’s latest album In These Silent Days may have come out just a few months ago but it easily makes the list. Carlile’s reliable sound (categorized as many different things, including alternative country, folk, and rock) comes through in her most recent release with plenty of beautiful belting vocals. She also scored three Grammy noms: Record of the Year, Song of the Year, and Best Pop Solo Performance.

Norwegian singer-songwriter girl in red exploded onto the indie pop scene with her massively popular debut album, and she even went viral on TikTok with her third single, “Serotonin.” She’s young too—at only 22 years old, she’s managed to amass a huge fan base, especially among a younger audience.

If 2021 was anyone’s year, it was Lil Nas X’s. With each single leading up to his first full length album, Lil Nas proved that he had more to offer than his record-breaking song “Old Town Road.” Unapologetically gay and critically acclaimed, Montero was nominated for a Grammy for Album of the Year and we’d be surprised if there was anyone who didn’t hear about him this year.