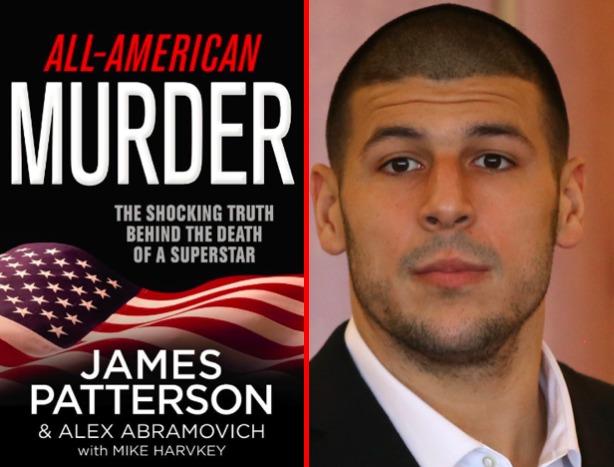 James Patterson, the bestselling author of the Alex Cross series and other trashy thriller novels, has a new book coming out about Aaron Hernandez, the NFL-star-turned-convicted-killer who committed suicide in his jail cell last year and sparked bisexual rumors for allegedly leaving a note for his gay jailhouse lover.

All-American Murder, co-written with Alex Abramovich and Mike Harvkey, examines the life and death of the late football star, who Patterson says he felt “compelled” to write about because of his “fascinating, complicated, and troubling” story.

“I don’t usually do nonfiction, but I was compelled to do this story,” Patterson told the AP. “You can’t take your eyes off this guy because of all his gifts: his good looks, the smile, the beautiful fiancee, the baby girl, the $40 million NFL contract.”

A premise like that doesn’t fall into your lap everyday. So, naturally, Patterson, has sold over 365 million books to date, had to capitalize off it.

The author also sat down with “48 Hours” to discuss his latest snuff project. When asked about rumors that Hernandez had a gay jailhouse lover, he seemed skeptical, though he admits he’s not 100% sure.

“We never talked to anybody who said there was something to that,” he said. “He was in his cell 22½ hours a day. He had virtually no contact with any prisoners. What could he do?”

As for reports that Hernandez experienced a jailhouse conversion and wrote “John 3:16” in blood on a his jail cell wall, Patterson says those reports are, sadly, true.

“He was clinging to this notion, real or imagined, that if he believed in Jesus he could be saved. But he was over the top with everything. His thinking was scrambled big-time.”

After his death, Hernandez was diagnosed with chronic traumatic encephalopathy, a degenerative brain disease that results from frequent blows to the head and can cause depression and violent mood swings.

“If you take somebody with a psychopathic personality–somebody who enjoyed killing people–hit him in the head a few thousand times and add some PCP and weed, you have a nightmare,” Patterson said.

All-American Murder will be released next week. The movie rights have already been purchased by The Mark Gordon Co.