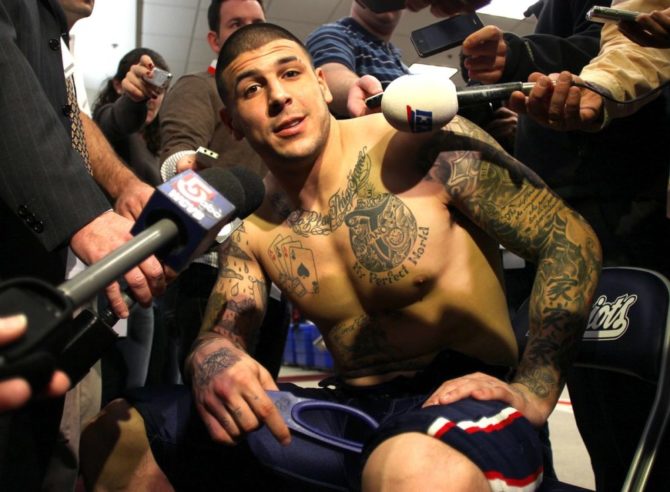 Jonathan Hernandez, older brother of late New England Patriot’s footballer Aaron Hernandez, has made some big revelations in his new family memoir, The Truth About Aaron. Jonathan confirmed the rumors that have long swirled around Aaron: he was gay.

Aaron Hernandez rose to fame as a tight end with the Patriots but was charged with the murder of semi-pro football player Odin Lloyd in 2013. A court convicted Hernandez and sentenced him to life in prison without parole. Following acquittal on another murder charge in 2017, Hernandez committed suicide.

Now Jonathan Hernandez has opened up about their family secrets, and his brother’s tortured upbringing. He says their father abused both boys, beating them for the smallest of infractions. Jonathan also says an older boy sexually abused Aaron at age six. The abuse went unreported.

“We were brought up in the sense that seeking help was weak and, you know, crying was weak,” Jonathan said to CBS. He also adds that Aaron’s relationship with their father changed after he began to excel in sports. Knowing their father disapproved of homosexuality also cast a pall of guilt and shame over Aaron. “You could kind of see what, you know, his conflicts were and what he was struggling with, and it’s, you know, his sexuality … and accepting himself.”

Aaron’s shame, coupled with brain injuries sustained on the football field, led to dramatic changes in behavior, according to Jonathan. He also says he’s come forward with their family story in hopes that it will save others from a similar, tragic fate. “I just hope that people can understand and appreciate the value of seeking help and understanding that you’re not weak,” he said. “It’s actually courageous.”