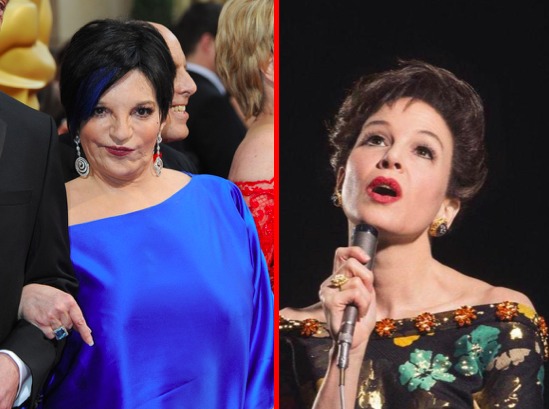 Living legend and gay icon Liza Minnelli has scored yet another comeback of sorts, this time with a major interview in the trade paper Variety. One thing Liza refuses to discuss: the biopic of her mom, Judy.

Minnelli’s refusal to discuss the film has a certain weight, given that the Academy Awards ceremony will take place in just a few days.

Judy nabbed two Oscar nominations, one for Best Hair & Makeup, and another for Best Actress. Renee Zellweger is the odds-on favorite to take home the golden statuette for her performance in the title role.

Liza, however, does not want to discuss the project. “I hope she had a good time making it,” Liza says of Zellweger then refuses to discuss it any further.

Though she remains mum on the movie about, well, her mum, Liza had no problem opening up about her family life, her own career as a Tony and Oscar winner, and her close friendships with other showbiz luminaries like Bob Fosse. She also dishes on her own loving, if competitive, relationship with her mother.

“I remember Mama saying, ‘Now don’t get upset because of the way they may compare you to me because you’re an entertainer too.’ I said, ‘Oh, I won’t.’ And then she reads something where they compared me to her. She said, ‘How dare they? You’re your own woman. Dammit! Can’t they see?’ And she’d throw it down in the trash.”

“She was wonderful and so overprotective. She tried saving us from any of the stuff that other people said, except the great stuff.”

In the past, Minnelli has said she has no interest in ever seeing Judy, as neither Zellweger nor any other creative minds behind the film consulted with her about how her mother should be portrayed.