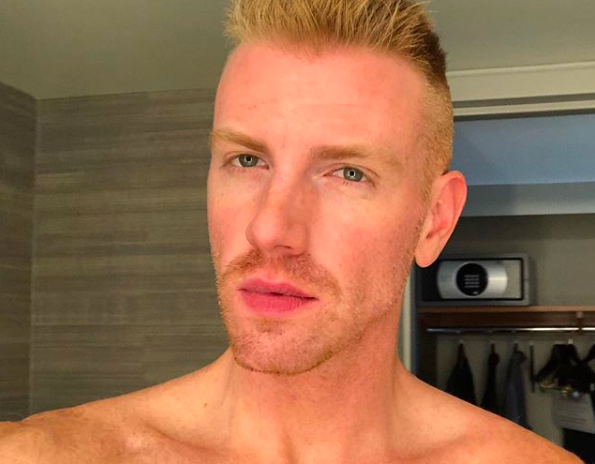 Actor Daniel Newman knows a thing or two about surviving an apocalypse after playing Daniel on The Walking Dead for three seasons. But he says no amount of zombies and other fictional invaders prepared him for the grim realities of coronavirus.

Over the weekend, Newman, who came out as bisexual in 2017, published an op-ed in the New York Times about his recent experience going to the ER for what he suspects was COVID-19.

The 38-year-old believes be may have contracted the virus when he was in Australia for Sydney Gay and Lesbian Mardi Gras from February 25 to March 3.

“We marched in a Pride parade, participated in interviews with local TV stations and attended a week of concerts, parties and dinners in celebration of LGBTQ Pride,” he writes.

Though he had heard about reports of the coronavirus in China, he says he believed the virus was contained. Then, towards the end of his trip, he developed a “mild cough.” He assumed it was just a cold a flew back to Atlanta on a full flight.

“Three days later, my symptoms worsened,” he writes. “Going for walks with my dog would leave me out of breath. I coughed at night and had difficulty breathing when I tried to sleep. I heard news that someone in my Mardi Gras group tested positive for the coronavirus.”

After phoning his doctor and several other urgent care facilities around Atlanta, he finally found an ER with coronavirus testing. When he called, a nurse told him to come in for a test.

When Newman showed up, he was ushered into a private exam room where a team of doctors and nurses asked him questions, took X-rays, ran blood work, and collected nasal and throat swabs.

“Getting preferential treatment felt wrong,” he writes. “I thought about all the people in line who had just been turned away and could be returning home to infect their loved ones.”

Thanks for all the concern! I guess a lot of #WalkingDead fans saw me in the emergency room regarding #CoronaVirus. Sorry I didn’t reply I needed time to process. So here’s what happened. Yes I was just in Australia with Sam Smith, Dua Lipa, and thousands of people from around the world for Mardi Gras Pride. I was exposed to some sick people and I started developing symptoms and then back in the states I was notified someone in our group tested positive for #Covid19. I spent all day calling every urgent care and hospital no one had tests! Finally I found one emergency room that told me my symptoms match and to come in immediately. I did all the tests and they told me because I have “mild symptoms“ the government won’t allow them to process my tests! They don’t have enough they’re not prepared, even though all my symptoms match. They’re only allowed to process “severe symptoms, elderly, or people recently in Italy and China”. It cost me $9,116!! and they didn’t even give me results. They sent me home and tons of other ill people that could potentially infect their communities, just telling us to “self Quarantine“. Why after almost 3 months since China is our country not prepared with tests, masks, hand sanitizer, toilet paper! Why after one day of shaky stock markets did they invest 1.5 trillion into the markets, but not the Healthcare system after three months! This was not a surprise, this was not being prepared. We’ve already gone through #H1N1 #SARS why didn’t we have a pandemic unit ready when this happens every few years!? Everyone please treat each other with kindness and Love ??! We are all going through this together. Young people are not immune, thousands of people are dying around the world. Please be safe, wash your hands, stay 6 feet or more away from people and stay home. I love you guys so much you can get a hold of me on here or Twitter if you need to talk I’m here for you. Love – D

After waiting a while, a doctor came back into the room and informed him that there weren’t enough beds and, since his symptoms were not severe (meaning he could breathe), he would have to go home.

When Newman asked about his test results, the doctor replied, “The government won’t allow us to process your samples.”

As he was checking out, Newman says he was handed a bill for $9,116, even though they never processed the coronavirus test.

“We won’t know how bad the problem is until people are properly tested,” Newman writes. “Young people are not immune. There has to be a more efficient way to test people for the virus. We are not prepared.”

The actor says he now fears he may have passed whatever illness he had onto  others. Just to be on the safe side, he’s been living in self-quarantine since that ER visit.

“I haven’t seen my family since returning from Australia,” Newman says. “I wish I could know whether it is safe to see them.”

“The echoes of my acting work in today’s world are eerie,” he concludes. “The Walking Dead is one scenario of the apocalypse: Society shuts down, stores are ransacked, and the power goes out. No one can go to work, no one can function. New groups form in isolation.”

“We have to find a way to survive–and to be prepared for what’s next.”