29-year-old Adam Rippon plops down on the couch next to us, chipper and smiling, giggling over his love of Queerty.

Rippon, of course, became an international star at the 2018 Winter Olympics in Pyeongchang, South Korea. There he became the first gay American man to take home a medal: the bronze in Men’s Team Figure Skating. His hilarious banter in interviews–along with biting, courageous criticism of Mike Pence while competing for metals–further elevated his celebrity, which he parlayed into a massive Instagram following. He later won the reality TV competition show Dancing with the Stars and announced his retirement from figure skating late last year.

Just after his chat with the women of LadyGang, Rippon chatted with Queerty about fame, and life after the Olympics. His episode of LadyGang airs April 21 on E!.

What’s the state of your life today, now that you’ve retired and that Olympic Mania has slowed down?

It comes out in October. It’s been way more work that I thought it was.

When I first started I was like I’ve written an email.

It’s a little longer than that, but I have a great team that’s been helping me. I’m in final edits now. It feels very final. Honestly, it’s been great because it’s been like therapy for me to kind of go through everything and just kind of like analyze everything I’ve gone through. My main focus is that it’s all funny. It’s a book where you can learn a lot about me and maybe learn something from me, but that you will laugh the entire time. 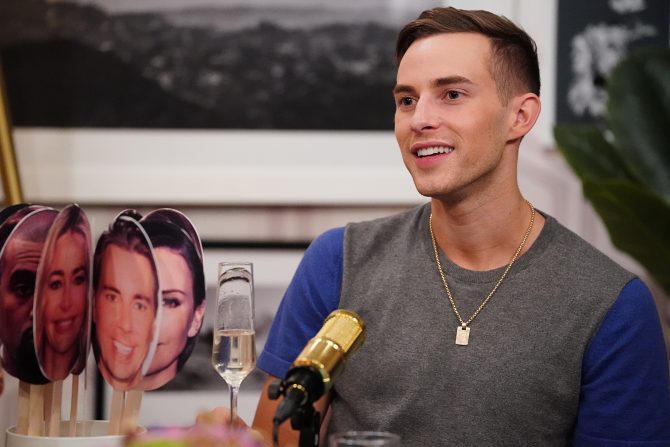 What kind of catharsis have you found in writing it?

It’s been really good, especially in this big transition in my life, when I go from everyday training and competing and getting ready for the next season that all of the sudden my life is completely different. To go from that to something like writing a book or going to therapy every single day is needed. So this book has been my therapy for the past few months. Talking with the editor, writing everything down, it’s been my way of processing what’s gone on.

So what are you doing with your time when you’re not on talk shows or writing books?

It was always a place where I went to work. But now it’s where I go to find my peace of mind, to have a moment to myself, which I’m really grateful for. It reminds me of why I loved it so much to begin with.

Do you miss training?

I do. I miss it every single day. It’s so hard to go from working out seven hours a day to all of a sudden not having enough time to go to the gym for an hour. The level of effort you put in is still the same, but the level of exhaustion is totally different. When you work out for eight hours, you’re physically drained. But when you’re working on something that you’re trying to make funny and entertaining for people, it’s draining, but not physically draining. It’s such an interesting transition from athlete to entertainment. But I’ve enjoyed it, and I got to work with such great people and people who have become mentors. People that I look up to. But that doesn’t take away the challenge from it. 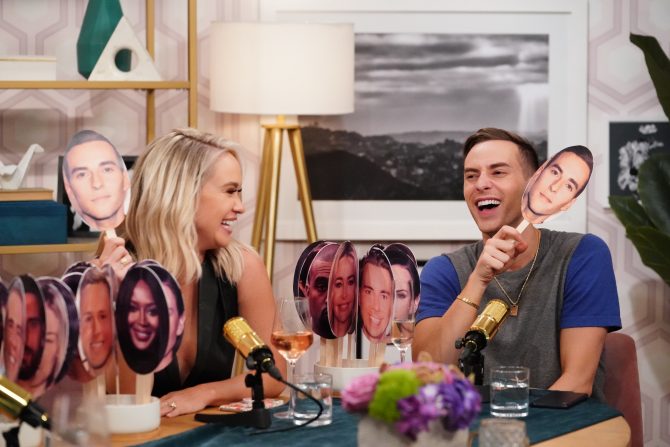 So, for this transition into entertainment, one of your contemporaries, Johnny Weir has made a whole new career for himself as a sports commentator. Do you have similar ambitions?

I think I’d want to go into the comedy route, less sports.

On a bucket list, I have stand-up. I would love to do stand-up. And I would love to do sit-com stuff, but I feel like I really love interviewing people and learning their stories. So I feel like being able to be a little quick-witted is helpful to get people to calm down, to feel relaxed, to feel comfortable in an environment. I feel like Johnny, and especially Johnny and Tara [Lipinski] together do such a good job in the sports world, that I feel like I can do something different from what they’re doing because they already do it so well.

So, like, The Adam Show? That would be really fun. Strike while the iron’s hot, as they say.

Now, in the news…you had your own dust-up with Mike Pence.

Which we love; someone needed to say something. Mayor Pete Buttigieg had his own recent encounter, which has gone on even longer than yours did. What advice do you have for Mayor Pete in the way he approaches Pence or the way in which he fields questions about his sexuality? It’s natural that some voters will be curious.

He has all the personality of a paper bag. He’s boring.

Yes! And I have a lot of respect for the offices of the President and Vice President, but I feel like Donald Trump and Mike Pence have made a mockery of it. They don’t represent what that office means. I think there will be a lot of questions from a lot of sources for Pete and about his marriage to his husband. I hope that they’re open to answering them, just to educate people about their normal life and what they’re about. But…

Look, Mike Pence is a fraud. He stands for nothing because what he says he stands for, he stands behind Donald Trump who completely stands for the opposite. So he’s a nobody.

Having a leather moment at #oscars2018

True story. So I have to ask, where do you keep the Moschino harness? Do you still have it?

No. It was actually on loan from Jeremy Scott. So I wore it that night, and then I gave it back the next day.

I’m assuming you got no further action in it then?

No, I got one red carpet, a ride in my car to the hotel, and that was it.

Well, at least you became a meme out of it. You’re on Best of Grindr.

Yes. That was great.

Last question. What would you add—what advice—would you give to other young queer people?

Find what’s important to you, and stand up for that. Think about yourself when you were younger and the things that you wanted to say and that you wanted people to stand up for so that you can be the voice the wish you had. That way, at the end of every day, you can go to bed and lay your head on your pillow and know you’re doing the right thing.

Be the voice you want to hear.

Even if you don’t think anyone is listening. Do it for yourself. When it’s important, people will be listening and will know that you’ve been there for a while and that your voice is authentic. There comes a time and a place for everybody’s voice to be out in the spotlight.

If you’re true to what you believe in, it will be there at the right time.