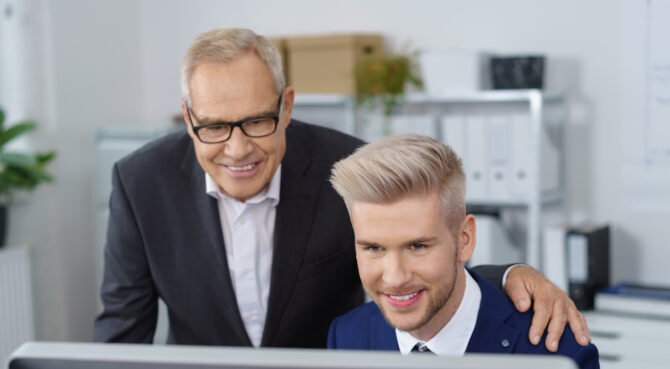 Is it wrong for a Gen Z-er to be attracted to a Gen X-er, and is the converse creepy? Those are the questions Reddit user recently asked the sages of the r/AskGayMen subreddit. This user, whom we’ll nickname Z, says he’s 21 years old and is “mainly attracted” to men in the 35-to-50-year-old range.

“Although it feels totally natural to me, I sometimes cannot refrain from thinking whether there might be something slightly wrong with it,” he wrote.

Z said that if he were the older one, he’d feel predatory dating someone 20 years younger. But he doesn’t feel that way about the older men he dates. “Most of the time, they’re more mature and responsible (as should be expected, of course),” he said. “And in general, I feel like they have more to offer intellectually.”

Z also wondered if the taboo of dating someone much older was part of the allure for him—or if he had “unresolved daddy issues” in his subconscious. “Anyway, what are your thoughts about it?” he asked. “If you’re an older man attracted to younger guys, why do you find them attractive?”

Related: At what point does an age-gap relationship represent a power imbalance?

One commenter said he and his husband have been together for 16 years, and they’re 17 years apart. “You just have to be realistic about later years in life, when most likely, the older [person] will die, leaving the younger with many years left to live. But that can be any relationship at any age,” that commenter added. “Don’t build a relationship just on the sex. There has to be a lot more in common to keep life fun for both. Sex is great and all, but that leaves you with another 23 hours and 52 minutes a day to stare at each other, lol.”

Another Reddit user said age gaps in straight relationships almost always make him feel uncomfortable, since that kind of dynamic “always feel predatory” to him. But age gaps in queer relationships don’t give him as much pause, as he explained: “For sexual encounters only, I don’t care as long as everyone involved is able to consent and consenting. For a relationship, my only worry is relatability. I wouldn’t want my partner to have much different life experiences than me because common—or, at least, similar—experiences are valuable. Other than that, I don’t think it’s weird. I don’t care.”

A third commenter spoke along similar lines: “If both parties are consenting adults, it’s really up to them if an age gap is ‘too much.’ Personally, as what you’d call an older guy, I don’t find myself attracted to guys your age because we tend not to have a lot in common—which isn’t to say that it couldn’t happen, just that it hasn’t and doesn’t seem likely. The largest gap in any relationship I’ve had was 8 years—I was the younger—and it wasn’t ever an issue, but we were both over 25, young professionals, did the same sport, etc.”

And someone else aptly pointed out that “a lot of life happens between 21 and 35.” That Reddit user said he dated a 40-year-old while he was in his late 20s. “He said something when we parted that is so true. I wasn’t going to be living with the wisdom of a 40-year-old any sooner than he was going to forget the lessons that come with finally maturing in your 30s,” the Reddit user recalled. “Enjoy ‘em at any age, but expect that life differences will pop up. So long as you are kind to each other, there is a lot of joy to be had.”