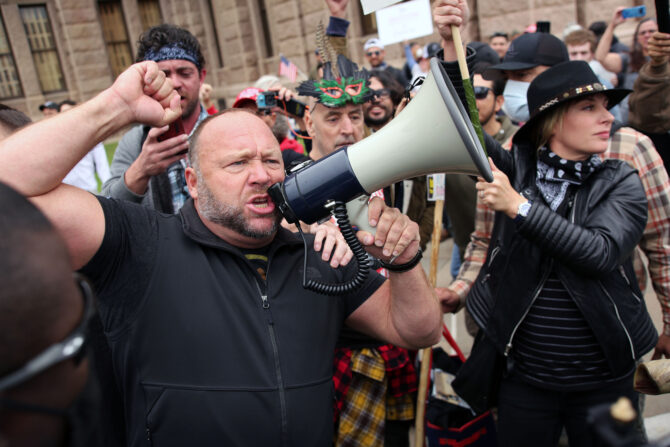 The right-wing blowhard and climate change denialist made the claim on December 13 radio broadcast. In it, he once again denied the ongoing effects of climate change, and pointed to secret government weapons as the cause of a string of tornadoes that have killed dozens of people.

“So, they just think you’re stupid and they don’t want you knowing they are doing all of this, and they’ve got carbon systems they are putting in, that big, huge geoengineering systems, terraforming systems that are sucking carbon dioxide out of the air when it’s a trace gas that we need, and was hundreds of times higher millions of years ago than it is now,” Jones ranted. “That’s why plants and animals were so much bigger and healthier. But we’ve adapted to live in less air. This is insane, ladies and gentlemen.”

“So the question is, did they use weather weapons to cause the tornadoes?” Jones further wondered. “That’s a legitimate question to ask.”

Ya know, for once we agree with Jones: his claim is insane.

Of course, insane claims are nothing new for Alex Jones. In the past, the QAnon follower has proposed conspiracy theories ranging from the widely-debunked “Pizzagate” theory that a cabal of Satanist pedophiles practice human sacrifice in a pizza shop to the claim that the government staged the Sandy Hook Massacre of 2012. Jones has also earned notoriety for his personal issues, including an arrest for driving while intoxicated and allegations of wife-beating. In 2020, Jones received a warning from the Food and Drug Administration ordering him to stop selling untested “cures” for COVID-19, a virus he previously denied even existed.