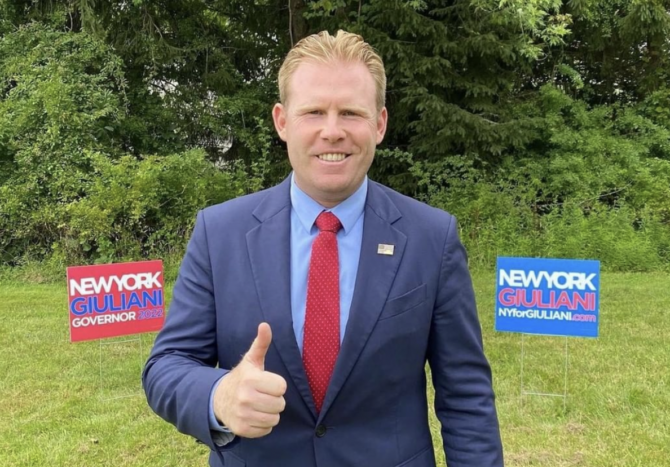 Andrew Giuliani’s gubernatorial campaign has been taken off life support and officially dead, but he doesn’t appear to have received the memo yet.

Another new poll released by the Zeldin campaign found Giuliani doing even worse, with the congressman leading with 45% and Giuliani tied with former Westchester County Executive Rob Astorino at just 14%.

Related: Literally nobody gives AF about Andrew Giuliani as he marches past them in rainy parade video

Zeldin became the party’s presumptive nominee after capturing 85 percent of the delegates’ vote at the state GOP convention on March 1. He has also received endorsements from 59 of New York’s 62 county Republican committees.

Despite all this, Giuliani has vowed to keep campaigning against him until the official GOP primary in June. He has adopted the Trump-inspired hashtag #MakeAlbanyGreatAgain and, just the other day, posted a video to Instagram calling for volunteers to join his doomed effort.

“We are looking to hire a few more outstanding New Yorkers to carry to get me on the ballot and give the nearly 3 million registered Republicans a voice over who their nominee will be,” he captioned the video.

If sinking poll numbers and a lack of volunteers wasn’t bad enough news for Giuliani, an unhinged interview he gave with a Russian propaganda outlet last year recently resurfaced and, well, let’s just say it hasn’t aged well since Putin decided to wage an unprovoked war on Ukraine.

Related: Literally nobody gives AF about Andrew Giuliani as he marches past them in rainy parade video

Speaking to state-owned Russia Today last April, Giuliani claimed Americans no longer wanted to live in the United States after his father’s home and office were raided by the FBI as part of an ongoing investigation into the Trump-Ukraine scandal.

“They don’t want to live in a country where you’re going to have a Justice Department that is going to politicize something to the point where a former president’s personal counsel is going actually [to] be spied on by the Justice Department,” Guiliani said. “If they do it him, they could do it to us, and no one would probably even know!”

I’m trying to enjoy my iced latte outside on this nice day and these people are here campaigning for Andrew Giuliani pic.twitter.com/jB3RQk85rS