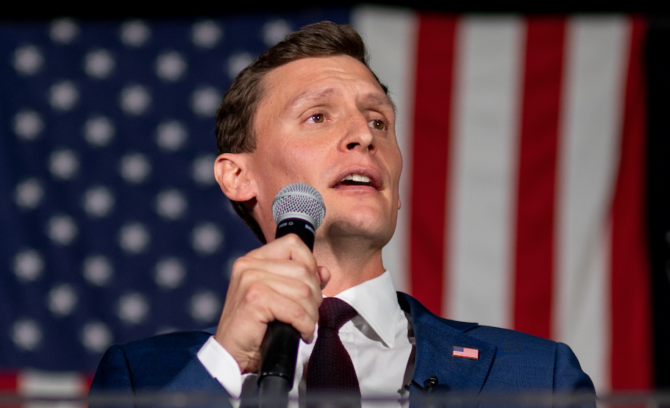 When blaming President Biden ad nauseam for inflation still leaves you trailing in the polls, what’s a right-wing senatorial candidate to do? Arizona’s Republican U.S. Senate nominee Blake Masters found his answer: blame the gays… and Black people… and women?!

The Trump-endorsed candidate appeared to suggest that America needs more straight, white men to get back on track, implying diversity is to blame for economic hardship.

Masters shared an Associated Press report that said the Federal Reserve’s leadership “has become its most diverse ever. There are more female, Black and gay officials contributing to the central bank’s interest-rate decisions than at any time in its 109-year history.”

“Finally a compelling explanation for why our economy is doing so well,” the anti-LGBTQ Senate hopeful sarcastically quipped.

Finally a compelling explanation for why our economy is doing so well https://t.co/Ub2CeiyjCs

Would you believe us if we told you the comment didn’t go over very well?

Many were quick to condemn the glaring racism, sexism and homophobia all baked into Masters’ one little tweet:

So your argument is Black, female and gay = incompetent? The dog whistle is a bullhorn.

The party of open misogyny, racism, and homophobia.

Only straight white men can do money. I am very smart.

And others called out Masters for overblowing the problem. His website even claims that “America is starting to feel like Soviet Russia” as the elderly are forced to take “cold showers”:

The fed policy has slammed the brakes on inflation.

We are at full employment and then some.

If present trends continue, we may achieve a soft landing: price stabilization with no recession.

I suggest you cry harder.

3.5% unemployment, wages up, workforce participation rate 2 percent higher than when Trump left office.
Yes, the Fed is working towards its goals, thanks for noticing!!

Then there were the responses looking at Masters’ tweet in the context of his struggling campaign:

So you’re not seeking the support of women, black & brown people or the gay community. It might be easier to just say you want to be the candidate for wealthy white male Arizonans then, yes?

Voters are diverse as well. Uh oh, you aren’t going to do well in the election.

According to the latest data from FiveThirtyEight, Masters is trailing his Democratic rival, incumbent Sen. Mark Kelly, by nearly eight points.

If he’s beginning to appear desperate, it’s probably because he is.