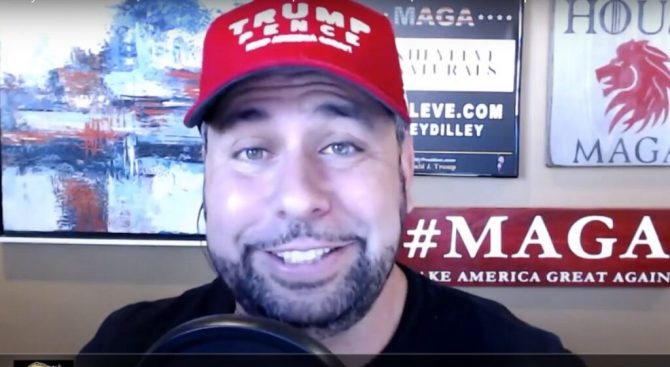 Professional troll and self-proclaimed “MAGA life coach” Brenden Dilley is at it again.

During a recent episode of his barely-watched YouTube show, Dilley weighed in on the mask debate, claiming he doesn’t have to wear one because he hardly ever wears condoms and, so far, he’s only produced three offspring.

“B*tch, I’ve got f*cking three kids,” Dilley said. “I barely even wore condoms when I had to. It’s like, I’m not wearing a mask! I ain’t doing it! It’s bullshit!”

Dilley, who has three children by three different women and once demanded to see out Pennsylvania Rep. Brian Sims perform oral sex on another man, went on to argue that he doesn’t wear a mask during the flu and cold season either, so why bother wearing one during a global pandemic?

With that kind of logic, “the end” may come much sooner for Dilley than he expects.

MAGA life coach Brenden Dilley has three kids from different women because he "barely even wore condoms when [he] had to," so he certainly isn't going to wear a mask to prevent the spread of COVID-19. pic.twitter.com/Q8Uorx7Oub