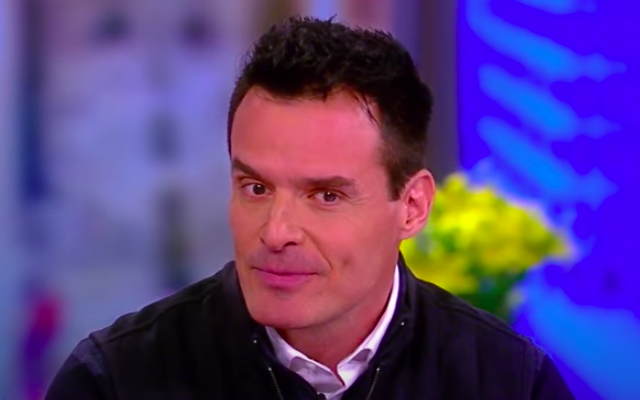 Actor and failed GOP candidate Antonio Sabàto Jr. is absolutely thrilled his new propaganda film “God’s Not Dead: We the People” is currently the #1 movie in America (according to him).

Sabàto tweeted his excitement this week, writing in ALL CAPS about how his comeback “IS THE #1 MOVIE IN THE COUNTRY AS OF MONDAY, OCT 4TH!”

. #GODSNOTDEADWETHEPEOPLE IS THE #1 NEW MOVIE IN THE COUNTRY AS OF MONDAY, OCT 4TH!

ONLY TWO DAYS LEFT TO SEE IT IN THEATERS!

We’re not sure where Sabàto got his numbers, however, because according to literally every other box office tracker in the country, the #1 movie in America right now is “Venom: Let There Be Carnage”, which was released on Friday and grossed $90 million last weekend.

That’s followed by “The Addams Family 2”, which was also released last Friday and grossed $17.3 million, and then “Shang-Chi and the Legend of the Ten Rings”, which was released six weeks ago and grossed $6 million over the weekend.

“God’s Not Dead: We the People” is only playing in theaters for three days–from Monday through today–as a Fathom Events limited engagement and we highly doubt it has surpassed $90 million in box office sales in that short amount of time.

The propaganda film is the fourth installment of the God’s Not Dead faith-based franchise. Sabàto plays a Christian father whose plan to homeschool his children is thwarted by an overreaching judge portrayed by Fox News’ very own Jeanine Pirro. It’s his first major role since he was “blacklisted” by Hollywood after appearing at the 2016 RNC, where he gave a speech in support of Donald Trump.

Last year, the anti-masker told Variety that his 2016 RNC appearance forced him to “sell everything” and move to Florida, where he got a job in construction.

“I was blacklisted,” he claimed. “All my representatives left me, from agents to managers to commercial agents. I literally had to move, find a new job to survive and take care of my kids.… It’s been terrible. It’s mind-blowing. It’s a disgrace.”

Speaking to local station PIX11 News this week about his comeback, 49-year-old Sabàto said he’s “extremely blessed” to be a part of the propaganda film, which Steve Pulaski of Influx Magazine called “utterly deplorable” and “the worst in an already-misbegotten series.”

“This is dedicated to a lot of patriots who just want to work in the industry, want to be left alone, want to make good entertainment, and that’s what we’re about to do,” Sabàto said.

Watch the trailer for God’s Not Dead: We The People below. Or don’t.

Subscribe to Queerty for a daily dose of #entertainment #antoniosabato,jr. stories and more