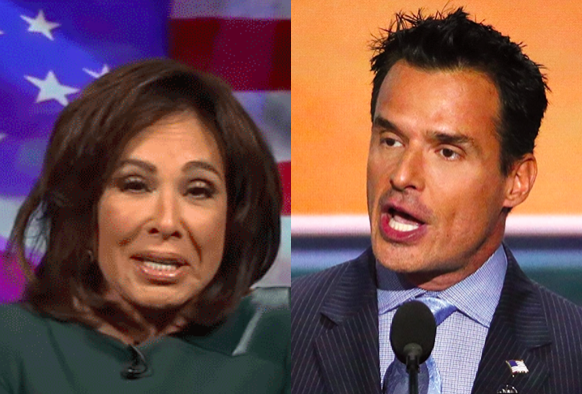 Actor and failed GOP candidate Antonio Sabàto Jr. is hoping his latest film project will be the comeback he’s been waiting for since 2003’s Testosterone, a straight-to-DVD film in which he played Pablo, a gay Argentine who disappears under mysterious circumstances.

The filmmakers behind God’s Not Dead recently announced the fourth installment of their hit faith-based franchise and it stars none other than the former Chippendales dancer playing a Christian father whose plan to homeschool his children is thwarted by an overreaching judge portrayed by Fox News’ very own Jeanine Pirro.

I’m so proud to be a part of this fantastic film with this amazing cast and crew. I can’t wait for you all to see it.

Executive producer Michael Scott says the propaganda film, which hits theaters this fall, touches on several “controversial” themes, particularly the issue of “parental choice” and whether children should be taught things like the Bible, LGBTQ history, and critical race theory in schools against their parents wishes.

“There’s a lot of societal issues we take on,” Scott told Newsweek. “What are our freedoms? What are our liberties? And how much should government control us? It’s timely, considering debates about critical race theory, revisionist history, and prayers taken from schools.”

In addition to Sabàto and Pirro, the propaganda film will also feature appearances by several other controversial Hollywood figures, including Isaiah Washington, William Forsythe, and Grammy-winning Christian singer Francesca Battistelli.

This will be one of Sabàto’s first major film roles since he was “blacklisted” by Hollywood after appearing at the 2016 RNC, where he gave a speech in support of Donald Trump.

Last year, the anti-masker told Variety that the appearance forced him to “sell everything” and move to Florida, where he got a job in construction.

“I was blacklisted,” he claimed. “All my representatives left me, from agents to managers to commercial agents. I literally had to move, find a new job to survive and take care of my kids.… It’s been terrible. It’s mind-blowing. It’s a disgrace.”

Speaking to Newsweek today, he says he’s excited about his new propaganda film because it has allowed him to “hold on to my beliefs and love for this country.”

“Every parent has a responsibility to know what is being taught to their children and the influence it has on them,” he adds. “If there is something questionable, this film allows you to see you have the ability to speak up and change the direction.”

Watch the trailer for God’s Not Dead: We The People below. Or don’t.