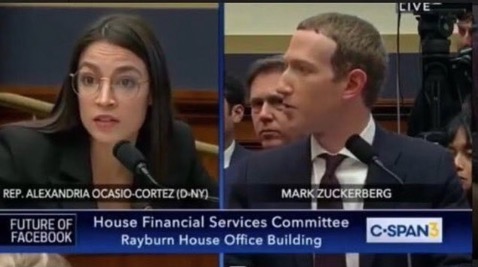 Related: Alexandria Ocasio-Cortez grabs the mic at a drag show and the crowd goes wild

Omg. Who did this? ???? pic.twitter.com/hzMIiRJSaZ

.@AOC: When was the Cambridge Analytica issue discussed with your board member Peter Thiel?

AOC: You don’t know? This was the largest data scandal with respect to your company that had catastrophic impacts on the 2016 election, you don’t know? pic.twitter.com/cIKgsyvPVL

At the hearing, AOC demanded answers about Facebook’s Cambridge Analytica scandal while she weighed the pros and cons of the social media platform’s Libra cryptocurrency project.

And she ripped into Zuck when he couldn’t answer questions about the chronology of the Cambridge Analytica flap.

“You don’t know?” she asked. “This was the largest data scandal with respect to your company that had catastrophic impacts on the 2016 election. You don’t know?”

She also pegged him, so to speak, on Facebook’s policy toward political ads with misinformation. “So you will take down lies, or you won’t take down lies?” she inquired. “I think this is a pretty simple yes or no.”

“It depends on the context that it shows up,” Zuck said, stammering.

.@AOC: Could I run ads on Facebook targeting Republicans in primaries saying that they voted for the Green New Deal?

Mark Zuckerberg: I don’t know the answer to that off the top of my head. I think probably. pic.twitter.com/wy46phoGp5

One person on Twitter, however, joked that this particular dom went too far, writing, “What kind of snuff is this? That poor teenaged boy was slaughtered!”