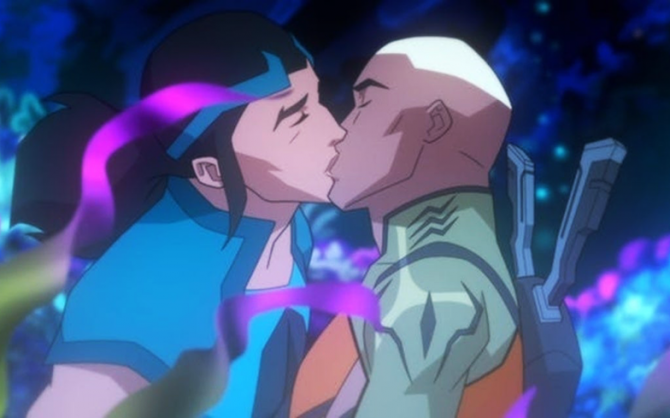 Great news for all those who take their men muscled and moist: Aquaman just came out of the closet.

The revelation came on a recent episode of Young Justice: Outsiders in which the character Kaldur-ahm, formerly known as Aqualad, Aquaman’s sidekick–locked lips on screen with another Atlantean man. The kiss came just after Kaldur-ahm took on the mantle of Aquaman.

Young Justice follows the continuity of the so-called “New 52” lineup, a revamped version of the DC comics universe that the publishing label used as an opportunity to diversify its cast roster. That included adding a number of new LGBTQ characters like Aqualad. It appears that the animated series has retained that devotion to diversity.

Kaldur-ahm’s new beau is Wyynde, an aid to King Orin of Atlantis. It’s unclear at this time if the writers intend for Kaldur-ahm to be gay or bisexual, as he has maintained relationships with women in previous seasons.

Frankly, we hope this relationship makes its way into the forthcoming live-action Aquaman sequel with Jason Momoa. Think of the cosplay that would inspire.