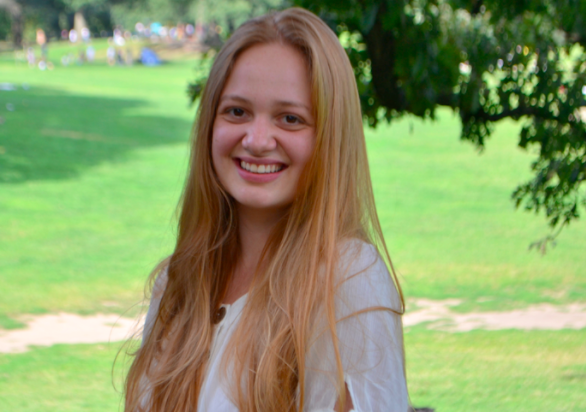 It’s Valentine’s Day, which has us thinking about looooove. And queer author Auriane Desombre’s forthcoming debut novel I Think I Love You is about just that.

The book, currently available for pre-order, is a laugh-out-loud funny, queer reimagining of Shakespeare’s beloved rom com Much Ado About Nothing. It centers around two teenage filmmakers, Emma and Sophia, who go head-to-head in a summer film competition. They have completely different visions for the types of films they want to make. But what starts as a fierce artistic rivalry quickly turns into quirky romance.

Queerty got a chance to chat with Desombre about her literary debut, bi representation in books and media, and some of her favorite bisexual characters of all time. Here’s what she had to say…

QUEERTY: First, congrats on your big debut! I love your tweet from January 1: “It’s my debut year.” How does it feel to have your first novel coming out?

DESOMBRE: Thank you so much! I’m feeling a lot of different things, but the main one is definitely excitement. I’ve wanted to be an author and a teacher my whole life, so spending my debut day with my students is going to be really special.

As a teacher, I love working with young adults, so as a writer, I felt drawn to writing stories for that age group. I also love exploring the connections between young adult literature and the books we consider to be literary canon, so when I started adapting Much Ado About Nothing into a contemporary context with I Think I Love You, I loved the idea of imagining modern teenagers caught up in Shakespeare-inspired romantic chaos.

I decided to use this retelling as an opportunity to write a queer rom com because I love giving space for queer representation in books. It was extra fun to do in the context of retelling a classic story, and having the chance to put queer characters at the forefront of retellings from a literary canon where queerness can be hard to find. As a queer writer, I know how important it can be to find those stories, so when I started writing, I wanted the opportunity to tell those stories, too.

One of the characters in the book is bisexual. I’ve always found the lack of bi representation in books, film, TV, music, and pretty much everywhere really frustrating, so I appreciate that you made this a central part of the story. Why is bi representation something that’s important to you?

I think it’s important to me in large part because it’s so lacking! Bi representation can be hard to find, and there are a lot of pervasive harmful stereotypes I wanted to fight against through this story of a bi girl claiming her identity and affirming its validity and importance through her art and her coming out journey.

There’s more discussion on this in the book, since it’s also really important to Emma to create thoughtful bi representation in her art. So there’s some bi-representation-within-the-bi-representation going on. I wanted to show Emma’s strong motivations to reflect her experiences in her film because it was important to me to not just feature representation, but empower teen readers to tell their own stories.

Who’s your all-time favorite bi character either in a book, TV show, or movie?

This is a great question! And one where I have a lot of answers. I love Peter in Our Year of Maybe by Rachel Lynn Solomon—I think it’s great to see more representation for bi boys, and Peter’s journey is an incredible one. I’m also obsessed with Caroline from Throwaway Girls by Andrea Contos. Caroline has my whole heart, and her story is absolutely beautiful. I’m really excited to officially meet Holly in Sonia Hartl’s upcoming book The Lost Girls: A Vampire Revenge Story, because who doesn’t love bi vampires?

I’d also be remiss if I didn’t mention Sammy Lieberman from the TV show Dance Academy. He’s awkward and hilarious, and I (without meaning to) named my dog after him, so he’s definitely one of my favorites.

Speaking of your dog, Sammy, I follow you on Twitter and may have a slight obsession with him. I gotta ask… Does he make a cameo in I Think I Love You? (Please say yes!)

Tragically, Sammy isn’t in I Think I Love You! I didn’t adopt him until after I’d already drafted this book, so the pet featured is instead a cat named Lady Catulet. But fear not! I have a more-than-slight obsession with him, so Sammy has made cameos in pretty much everything I’ve written since I got him, including the short story I contributed to the anthology Together, Apart.

Last question… What book are you reading right now?

I’m in the middle of Written in the Stars by Alexandria Bellefleur. It’s a wonderful f/f rom com that’s already stolen my heart.