Actors Ben Platt and Noah Galvin put on an amorous display on a dancefloor recently. Platt posted images of the couple dancing and exchanging a sweaty, passionate kiss to Instagram. Galvin reshared them to his stories. From their attire, we’re guessing they were maybe at a wedding.

If you swipe left on the posting above, you’ll also see the men engaging in some pretty energetic and suggestive dance moves. 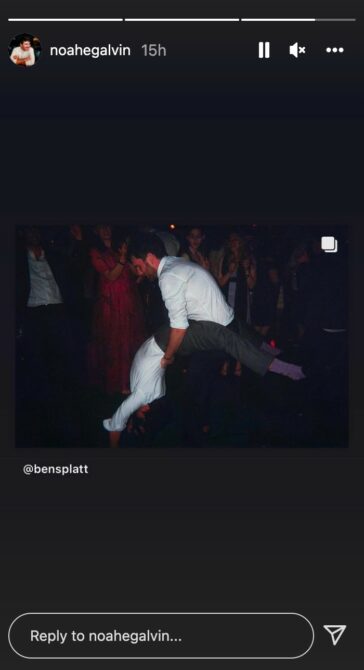 Besides racking up a quarter of a million likes on Platt’s Instagram account, the rom-com moment prompted plenty of praise, with Michelle Visage replying, ​​”AbsofreakinLUTELY” to the kiss pic, and Coltun Underwood posting lit and heart emojis (“🔥❤️’). Actor Jonah Hill called it “Cuteeeee”.

Both Galvin, 27, and Platt, 28, starred in the Broadway show, Dear Evan Hansen. Galvin has gone on to appear in TV shows The Good Doctor and The Real O’Neals. Platt had a lead role in The Politician and has released a couple of albums of music.

They were friends for five years before finally deciding to get together as a couple just before the pandemic struck at the start of 2020.

In December, Platt posted a photo to Instagram saying, “2021 often deeply sucked and yet he [Galvin] somehow made it mostly wonderful.”

It’s great to see the couple so happily in love with one another.

Related: Quarantine buddies Ben Platt and Noah Galvin have fallen in love and are now dating