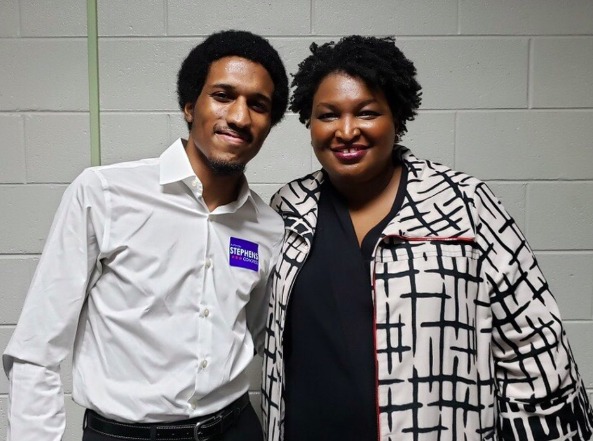 Antwon Stephens is a 23-year-old bisexual Democrat who is currently running for Congress in Georgia’s super conservative 9th district. Yet despite having all odds against him, he has Republicans feeling nervous.

In 2020, Stephens hopes to oust four-term Republican incumbent Doug Collins, who has represented Georgia’s 9th congressional district since 2013. Prior to that, Collins was a state representative in the Georgia House of Representatives, representing the 27th district.

Collins has a long history of supporting some of the most extreme anti-LGBTQ legislation in the country. In 2012, he not only opposed same-sex marriage, he opposed civil unions for same-sex couples. In 2016, he slammed President Obama for siding with trans people over where they should be able to go to the bathroom. And that same year, he also co-sponsored a “religious freedom” bill that allowed Christians to legally discriminate against LGBTQ people.

I’m preaching the numbers game everywhere I go because we have to revitalize hope in rural Democrats to fight again!…

According to his campaign website, Stephens believes Collins is one of the most “radical religious extremists” in public office and says “flipping one of America’s reddest districts won’t be easy.”

To win, his campaign plans to focus on the more diverse and often forgotten communities in his district’s rural areas.

The campaign believes he has just the right background to appeal to the over 175,000 voters in those oft ignored areas, which would put him within striking distance of Collins, who won his last election with roughly 225,000 votes.

“I was raised in north Athens, which is a much different outlook than actually being in the city of Athens,” Stephens tells Project Q Atlanta. “I was only a couple miles from the Madison County line. I was raised by conservative Democrats, so I have a rally good feel for what rural Georgia is looking for.”

Though they’ve been trying to play it cool, Republicans are clearly nervous about Stephens, as evidenced by a dire warning issued by Towns County Republican Chairwoman Betsy Young over the weekend.

“Rural, mountain counties be aware of the ‘play book’ of the far left,” Young cautioned her colleagues in a memo. “They know they have the city votes so they will concentrate on the outer areas, trying to change the minds of the more conservative voters or moderate leaning voters.”

Young added that Republicans cannot ignore Stephens and “must prepare” for a formidable fight.