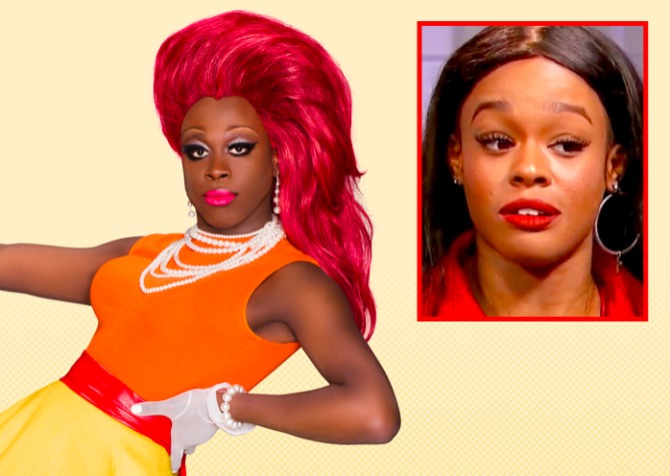 Just to recap: Banks cried foul on RuPaul‘s song, “Call Me Mother,” off his album, American, claiming the beat was ripped off from her 2016 single, “The Big Big Beat.”

Here are the two tracks back-to-back:

The album was reportedly pulled from Spotify while the matter was investigated, but was returned to the streaming service within a couple of days.

That prompted a series of tweets from Banks in which she said of Ru:

“I’m disappointed in him first and foremost as a black person. He was supposed to have my back … But he went with popular white gay sentiment and felt like I was disposable enough to steal from and discard. F*ck him.”

But apparently, she wasn’t quite finished. On Monday, Banks took to Twitter again:

I have so many good things going on right now and I’m so fucking annoyed that these dragged out clowns have found a way to attach themselves to me yet AGAIN. Like shit just because I’m queer doesn’t mean we walk step and step. I be trying to live my gay life with the KUNTS

And the white gays always find a way to inject their selfish ass ideas about how queer people are supposed to be into EVERYTHING I do. Why can’t you all just go the fuck away ? Seriously

Black queer women have a different fucking life from gay white men. Stop trying to police my queer experience and tell me how to be. You guys are honestly suffocating and I wish you would go away and stay away for good.

I’ve been actively trying to live my best black queer female life and you keep trying to force me to consider you when you have absolutely no consideration for me. I just want you guys to go the fuck away. Tired of this fake ass lgbtq shit niggas are not a community you guys are

TYRANTS. And not invited to my life. Get out and stay out. Kunt brigade only

You think you’re punishing me by copying my music but you’re actually showing to me how fucking jealous of me you are. You hate how fabulous and free I am and hate the fact that there’s no amount of makeup or girdles that could make you me. @rupaul.

Now, Bob the Drag Queen is weighing in on the controversy.

“I know I’m about a day late, but I wanted to take a minute to weigh in on this Azealia Banks ‘The Big Big Beat’ / ‘Call Me Mother’ controversy because it’s actually a conversation much larger than those two songs,” Bob says in a new vlog posted to his YouTube channel yesterday.

Something that’s quite common in queer black culture is that our culture is so underground and has roots that are hard to trace so people like to come in and co-opt ideas from black queer culture and act like it’s their own idea. Now [these songs are] house music. House music didn’t start with Azealia Banks. House music is from the early ‘80s in Chicago when disco was fading out but you still needed something to dance to. So people — groups like Future or Frankie Knuckles — would make these amazing tracks that really caught on. So in the black queer community in Chicago it became huge and big and expansive.

Then Bob turns his focus directly to Azealia Banks.

“Azealia Amanda Banks from Harlem, New York,” he says. “Listen, since you’re so interested in co-opting black queer culture and propagating it as your own, I think it’s time to drag you deep into the miasma of one of black queer culture’s greatest traditions: reading.”

That’s when the music starts Bob proceeds to give Banks a piece of his mind.

Related: You thought the Azealia Banks / RuPaul drama was all played out? Think again.